Musicians congregate at NT for day of jazz 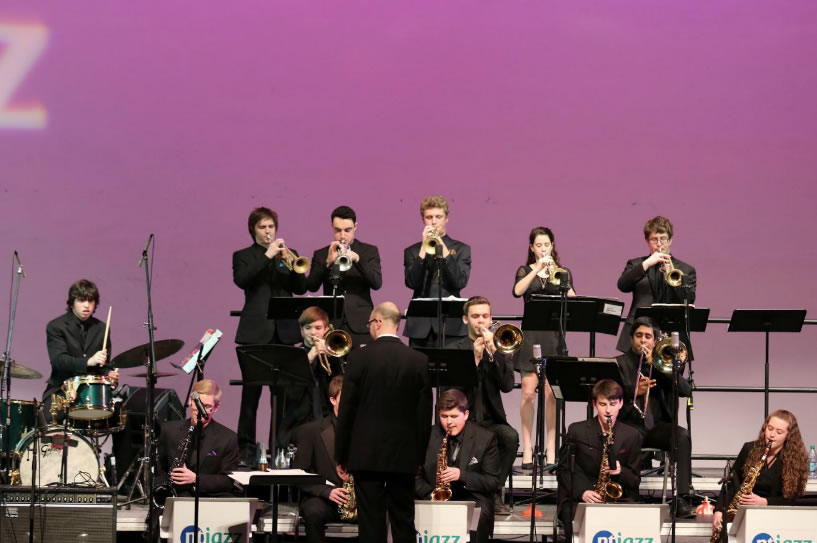 The 33rd annual New Trier Jazz Fest allowed a full day for students to share their love of the art form.
41 middle and high schools from Wisconsin, Michigan and Illinois filled every room and hallway of New Trier. The students traveled to the fest for the opportunity to show off their jazz chops but also to learn new skills.
The Jazz Fest events included performances by the visiting ensembles, clinics run by esteemed jazz musicians and, in the evening, a concert showcasing the New Trier Jazz 1 ensemble and the Chris Potter Big Band.
For the day to run smoothly, a lot of work had to be done beforehand. Emiel De Jaegher, senior and Jazz Fest student director, had many responsibilities: moving music equipment, knowing the room assignments for each visiting school and making sure that the student volunteers worked together.
“The key to the success was not working fast, but working smart,” De Jaegher said.
Nic Meyer, Jazz Music Faculty Director, said as a result of the students’ hard work the day went well.
The major element the students did was make the “guests feel that they were welcomed and wanted here,” Meyer said. Once the logistics were settled, the day went as planned.
The educational component of the “fest” were the clinics, which gave jazz students the opportunity to grow in their musicianship.
During the clinic, the clinician gave constructive criticism to the students on their playing. Some of the concepts they taught included how to count “swung” jazz rhythms.
They also gave tips to help the students improve their jazz improvisation.
But most importantly, the clinicians taught the students the importance of expressing their musical story.
Meyer said that the visiting schools come to Jazz Fest primarily for the clinic opportunities. “We ask schools to not bring their top band but bring their younger ensembles.”
The idea behind this was to give younger students exposure to these musical learning opportunities which they wouldn’t have received until they were in their school’s top ensemble.
After the many clinics and performances by the visiting schools were finished, the New Trier Jazz 1 students prepared for their performance. The Jazz 1 students played in the Gaffney auditorium to a sold out crowd of 1600 people. The audience was comprised of the student volunteers, members of the community, parents and the Chris Potter Big Band.
Jazz 1 performed a concert filled with songs that showcased different types of jazz music. They played “There’s a Boat Dat’s Leavin’ soon for New York,” by George Gershwin, which harkened back to the more traditional style of jazz.
They also played an Afro-Cuban number called “Guajira Dubois,” by Brian Lynch.
Michaela Ritchie, a junior trumpet player in Jazz 1, felt that her performance was enhanced because of the seniors in Jazz 1. “Because of the seniors’ confidence, I felt confident in our bands’ ability to play with the energy and preciseness required to put on a good show.”
Tyler Anderson, a senior and a tenor saxophone player in Jazz 1, said, “I performed with people I’ve known for years, some since middle school. That performance is the most memorable one of my life.”
The Chris Potter Big Band played after the Jazz 1 performance. Potter, a saxophonist, has been described by the Down Beat Jazz Magazine as “one of the of the best musicians around.”
As Potter played, the Jazz 1 students had their eyes glued on him as he effortlessly moved his fingers about the keys in improvisation.
At the end of Potter’s hour-long performance, the audience rose to their feet to give him a standing ovation. De Jaegher said, “Potter’s performance was both interesting and mind-blowing. His music is very contemporary and harmonically complex to a whole new level.”
Meyer said, “If the band directors leave here feeling that their students were inspired, then it was a successful day.”