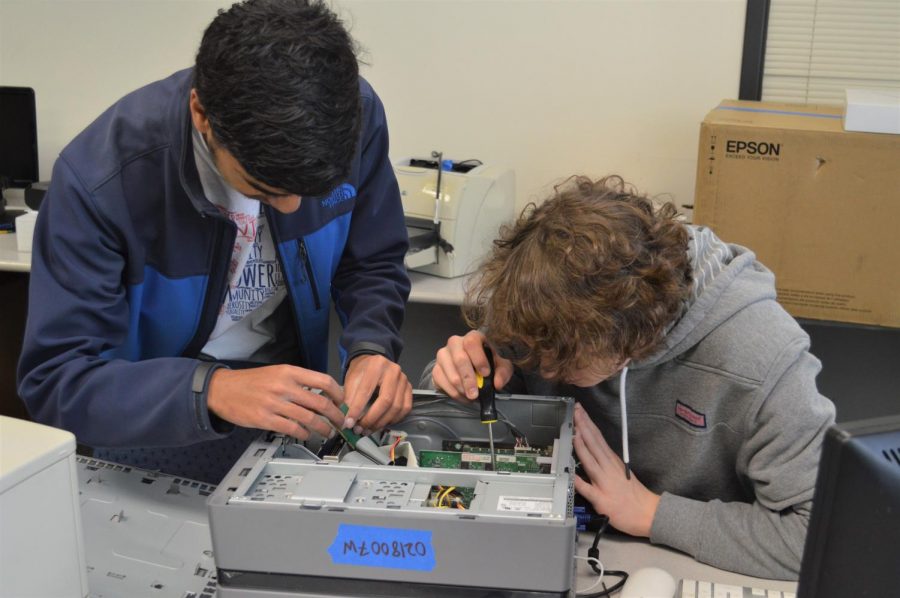 The club seeks to give underprivileged students access to technology | Rashid

Founded in June 2016, BinaryHeart has grown from a few friends fixing up an old computer to an organization with over twenty volunteers.

This January, the organization made the step to becoming an official club at New Trier. They meet every Wednesday after school in Room 224.

Since many jobs now require applicants to be comfortable using computers, students without access to technology are being left behind. The organization BinaryHeart is looking to bridge this gap and provide the opportunity for young people to become technologically adept.

While the club now has repaired over $58,214 worth of devices, BinaryHeart has humble roots, beginning in one of the founder’s garages.

“Around five of us in a garage were huddled around this old HP all-in-one desktop, trying to figure out what was broken,” recalled president and co-founder junior Marzuk Rashid. After five hours of work, the group fixed the problem—the power connector—and celebrated their first success.

At the foundation of the club, “we fixed anything we could get our hands on,” added board member and co-founder junior Asher Noel.

Now, with over 520 hours of service logged, BinaryHeart has streamlined their repair process and is able to turn around devices quickly.

“Our computers are meticulously organized in our New Trier storeroom and organized based on their status in the donation process. To fix computers, we have proper sets of tools and can replace dysfunctional parts with new ones from eBay or specialized websites,” said Noel.

As the organization began to publicize and make known their work, donations flowed in. In June 2017, a drive led to the organization collecting over a garage-worths of old devices. The group was then able to donate their first nine computers to students in Chicago.

While many service clubs at New Trier focus mainly on raising money, at BinaryHeart, volunteers get their hands dirty in the effort to repair real computers.

BinaryHeart is unique in that it combines the specialized knowledge of its volunteers with the will to help other people.

“Our focus on technology allows students to serve their community using a skillset that isn’t present in any other service group,” said Rashid.

However, Rashid added, “We are also able to accommodate volunteers with no prior experience with technology.” The group is currently focusing on outreach and expansion by attracting new members to the club.

Most of the members have been involved with technology since a young age. Rashid was first introduced to coding in 2nd grade and hopes to make this opportunity available to more students.

While New Trier students spend much of their time doing homework on iPads and laptops, only half of high school students in Chicago Public Schools reported using technology in school on a regular basis, according to a study done by the University of Chicago.

Board member and co-founder junior Jack Altman also recognized the need of universality of technology.

“We live in a time period when access to the digital age is almost mandatory, but not universally affordable quite yet.”

According to a study done by Microsoft Corporation, 77 percent of jobs will require some sort of technological skills by 2020, making it even more difficult for those without computer skills to have jobs.

By donating personal computers to students without them, BinaryHeart provides underprivileged students with the opportunity to succeed in these jobs.

The donated device “helps them to do better in school and helps them learn computer literacy skills which are essential in today’s world,” said volunteer and junior Daniel Hess.

Providing access to computers to children is especially important. “The exposure and handling of technology at a young age shapes a person’s relation to it, and in the 21st century, perfect technological fluency is the expectation among almost all workers and contributors to society,” said Noel.

It is much more difficult for an adult to become comfortable using technology than it is for a kid who grew up surrounded by it.

“It is crucial that every student has access to master the digital tools they’ll need to succeed in the modern world,” said Rashid.