Peter Copeland writes about his experience as a reporter 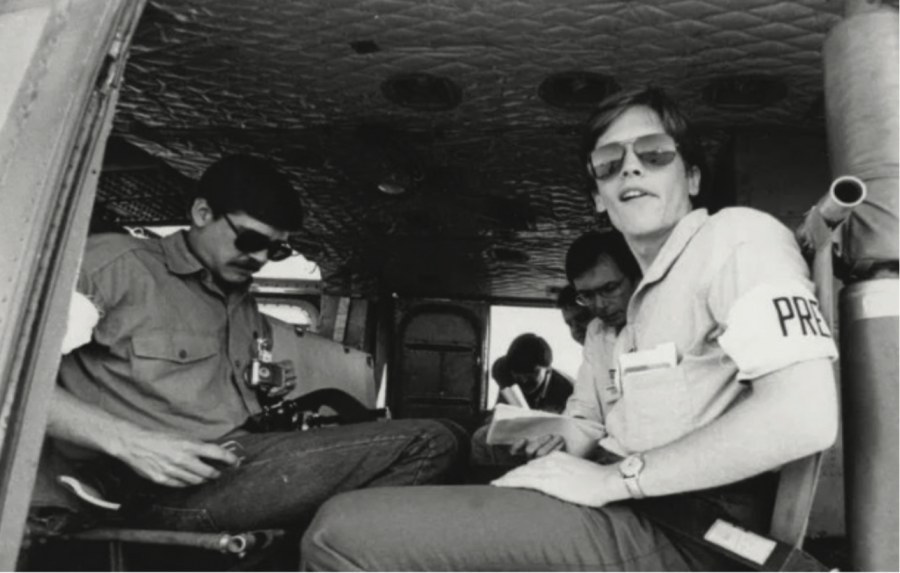 In 1985, Peter Copeland reported on Mexican drug trafficking via helicopter with the Mexican army

When journalist and author Peter Copeland graduated from New Trier in 1975, he did not have a strong sense of what he wanted to do in the future. Forty-four years later, at the Book Stall of Winnetka he talked to the public about his extensive career in journalism and his latest memoir, Finding The News.

Copeland captivated the audience of 30 adults, including his own mother, as he discussed what he had taken away from his career. Speed, accuracy, and fairness stuck with him the most over the years of reporting.

In high school, Copeland admitted he was an average student.

“I was just one of those B students, I flew under the radar, I hoped nobody noticed me, I did fine. I had friends, but I didn’t really take advantage of everything. I didn’t really wake up until I was a sophomore in college,” said Copeland.

Copeland experienced a great change in perspective when he moved from Wisconsin to New Trier in the middle of his junior year. Copeland discovered a writing ability he didn’t know he had thanks to English teachers that encouraged him.

“I felt a lot of support from the English teachers. I realized that I could be a good writer, and they helped me see that,” said Copeland.

Copeland credited the high academic pressure at New Trier for motivating him to start writing and to go to college as well.

College wasn’t expected of most high school students in the rural area where Copeland grew up. When he got to New Trier, though, the students were focused on getting in to college.

“I might not have gone to college. I mean, I would have because of my mom but it was a culture of achievement at New Trier,” said Copeland.

In college, Copeland met other people who shared his same excitement for politics. Those people taught him to be more engaged with the world and what was happening around him. That led to more participation in politics and an interest in journalism soon followed.

Good fortune seemed to follow Copeland, for under very random circumstances was he presented with his chance in the real world of journalism.

While in Traverse City, Michigan one summer, Copeland was introduced to Stan Cook, who offered Copeland a life changing opportunity.

“He was the publisher of the Chicago Tribune. It was one of those flukey things that just happened. My family didn’t know him, I had never met him before, and he just took a chance on me and opened a door and I got in,” said Copeland.

Because of Copeland’s strong curiosity and interest in the world, a characteristic fundamental to reporting and writing, Cook set him up with an interview at the City News Bureau of Chicago. Copeland received his first job as a police reporter there soon after.

“What’s fun about journalism is that you never get bored,” added Copeland. “Something different is always happening. That’s why it’s called news, right? Because it’s new.”

Copeland described many moments of his life, including when he met his future wife, with the word lucky. “I feel like I had guardian angels,” said Copeland.

Stationed as a correspondent in Mexico City, he found himself astounded by a beautiful girl at the movies. Throughout all of the movie, Copeland nervously practiced something to say in Spanish instead of watching the movie. But when the movie finally ended, Copeland chickened out. As he stepped outside to go home, though, he saw her once again, standing by the bus stop trying to ignore a group of pestering men.

“So I went up behind her and I tapped her on the shoulder and she jumps and in my terrible Spanish I said, ‘Do you want the bus, me to wait until it comes?’ And she was like, ‘okay.’ And we just started talking and that was in 1984 and we’re still together and we have two kids,” said Copeland.

Copeland has since retired from his career as a reporter, but it continues to influence his everyday life. From the great memories that he made while traveling and reporting, to the people that he has met and the lessons he has learned, the curiosity that urged him to ask questions will forever be a part of him.

Copeland said, “You should never worry about asking questions. That’s the job of a good reporter.”