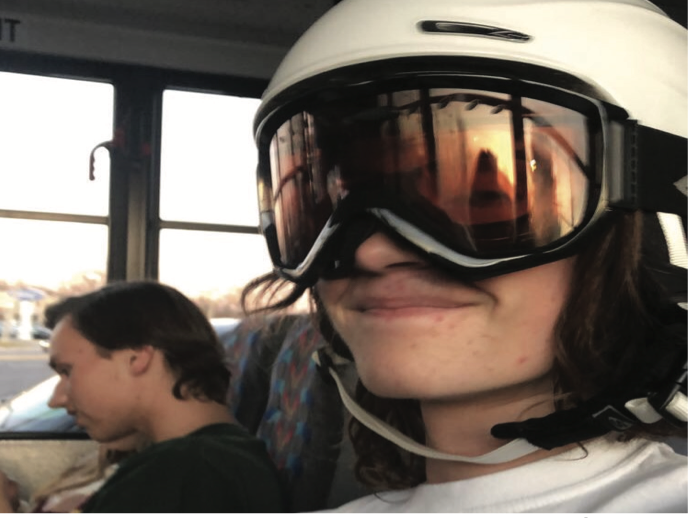 Henry Gilson on his way to Granite Peak in Wisconsin

This past weekend, the Ski and Snowboard Club made the four-hour trip to Wisconsin resort Granite Peak, where the members enjoyed a few days of fun on the slopes.

The club, which goes on two overnight trips and six day trips a year, is open to all levels of ski and snowboarding experience and is a fun way to step out of one’s comfort zone to try something new.

According to sponsor Ian Duell, buses left New Trier early on Saturday morning, and the club was able to get in about five hours of skiing or snowboarding before reconvening for dinner.

“The conditions were great since we had just gotten some fresh snow,” said Duell. “Last year, it was 20 below, but the temperatures were in the 30s this year.”

Freshman Maggie Kruse attended the trip and explained that going with friends contributed to the fun.

“I loved spending time with my friends and becoming closer with them,” she said. “It was great having the independence to do one of my favorite things: skiing.”

Marcus Buccellato, also a freshman, echoed Kruse’s sentiment that the Granite Peak trip helped deepen friendships and that having autonomy made the trip more exciting.

Students are allowed to ski or snowboard without an adult, and can walk to nearby restaurants for dinner.

Kruse said that she started skiing when she was two years old, while Buccellato began when he was six. While the two are seasoned skiers, Duell emphasized that the Ski and Snowboard Club encourages beginners to attend the outings.

“If you’ve never skied or snowboarded before, this is a great time to try it. Mr Atwell and I will help you with your rental, what to bring and what to wear, getting your ticket, etc. Like anything new, it
can be a bit daunting, but there are always people you can buddy up with.”

Most skiers and snowboarders bring their own equipment, but Duell said that about a third of the club rent. For overnight trips, members are encouraged to rent at a local sports shop and bring the skis or snowboards with as renting at the resort can take time.

According to Kruse, getting involved with Ski and Snowboard Club was easy, “This was my first trip with the club, and I started by joining the Remind to get all of the updates.”

Duell said that anyone interested in joining Ski and Snowboard Club can talk to him or co-sponsor Jamie Atwell and then join the club’s Remind group, an app that allows teachers to send announcements to students.

“The week before any outing, we go over the details because it’s an off-campus excursion–we need to make sure all of the waivers are signed and parents are aware of the logistics. The Remind lets all of the members know when these meetings are happening.”

On Feb. 8, Ski and Snowboard Club is planning on taking a day trip to Cascade, a resort in Portage, Wisconsin.

“We have upwards of seventy students in our Remind group, but we can only take twenty-seven
on each outing,” said Duell. “For the Granite Peak trip, we actually had to turn some kids away, so we encourage skiers and snowboarders to sign up as early as possible.”

Though a tentative plan, the club may attempt to go out West in the future.

“We talked about going out West at the end of last year, but it requires a lot of planning that hasn’t gotten done. Currently, Granite Peak is the furthest place we go, but that may change.”