One small nudge for math, one giant leap for learning 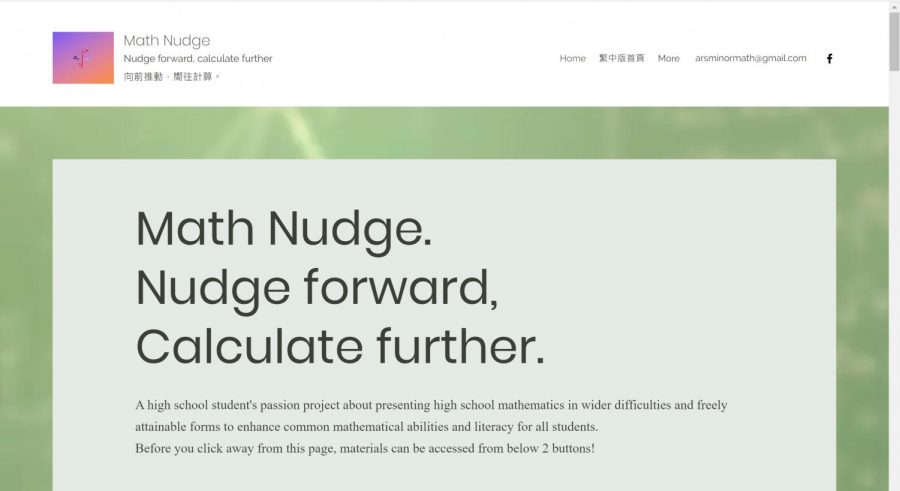 It all started with one Taiwanese boy who wanted to help his peers in the classroom. Now, he has his own website and posts educational resources that other people can use for free.

He is Senior Dun-Ming Huang, who started an independent project called Math Nudge. For this project, Huang is working on educational books with the title “Ars Minor Mathematica.”

Even though he started the project with the idea of textbooks in mind, Huang found that another term would be more appropriate to use.

“I no longer call them textbooks because I know that textbooks require a higher level of professionality that I currently still don’t have. So instead of calling them textbooks, I generally just call them books for educational resources,” he explains.

Huang started planning and writing last July, and was inspired  to start the project back in eighth grade. Wanting to help his peers who were falling behind in classes in his old middle school in Taiwan, Dun-Ming decided to write study guides for them.

“I thought I could help them by writing study guides with different levels of difficulty,” he said.

Since Huang separates his volumes of education books based on the different school years of mathematics and the school curriculum, he explains how he achieves different levels of difficulty in a single curriculum by consulting textbooks for each subject in different levels.

“[I do this] so that I know what is in the precalculus that I should avoid talking about in algebra 2,” he explains.

Huang’s sister, Hedy Huang said that her brother put a lot of time and effort into working on this project. She mentions that he has spent long hours writing for his website.

“Starting from his sophomore or his junior year, he spends a lot of time writing in his room and in the dining room. He sometimes devotes the weekends to it. It was kind of weird at the beginning because he has never worked so hard on anything like this,” she said.

Huang’s friend Kaiyu Yen also noticed changes not only in how Huang behaved but also how he produced books. Yen said that Brandon used to be a person that wants to do everything in the most efficient way no matter what it takes, but as he proceeded with the project, he became more patient.

“He started asking me about how to produce better templates, content, practice questions, and clearer solutions. I noticed that he made revisions by accepting a lot of different perspectives from readers. This proves him willing to accept other people’s perspectives and advice, unlike before,” he said.

After spending 15 months on this project, Huang admits that he sometimes wanted to quit in the first stages because “it’s such a long process.” The long revision period made this project even more challenging.

“Revising is a painful process. For volume one, I had to look through 40,000 words and fix them, which will take a lot of time and high levels of concentration,” Huang said.

Even though there are difficult times, Huang’s determination to keep going with Math Nudge surprised his sister.

“Math Nudge takes him a lot of time and he wrote tens of thousands of words. It makes me respect him,” she said.

Yen said that he gained more respect for Huang through this project and Huang’s purpose of helping people with his own educational materials.

“To me, the project was something really new. Moving to America at a young age was something that caused me to admire him. That led me to believe he can do what others at his age may not do, which is to study mathematics and publish his own instructional materials,” he said.

Through the 15 months spent on writing Ars Minor Mathematica, Huang says that he has learned a lot, not just about the craft of writing, but also about appreciating the value of making mistakes.

“I’m generally in fear that I’m going to make more mistakes. But I forced myself to go through the process of revision and reflection and I learned to face my mistakes directly so that I can learn from them,” he said.

“My biggest objective is to help students who are interested in learning more difficult math and students who need more resources to learn math. I hope that this resource can help students to realize how deep the math that they are learning can get and how it is going to be applied in real life,” he said.