Hastings climbs the ranks of competitive disc golf, finding community along the way 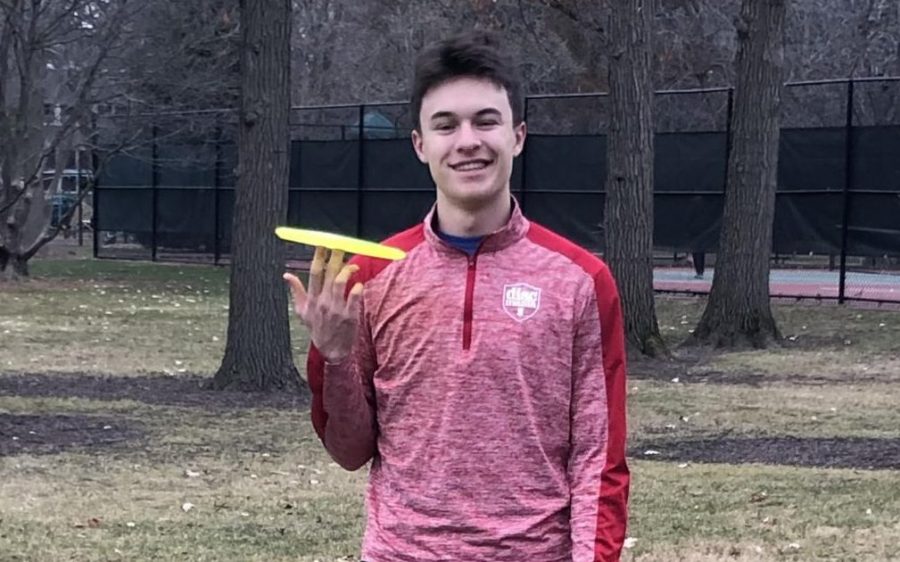 Junior Dalton Hastings’s love for disc golf was born after tossing a frisbee for the first time. Over the last four years, Hastings has competed at increasingly high levels. Recently, he has begin sharing the joy of the sport with the growing disc golf community.

“That release of energy followed by the sight of the disc flying down an open field is second to none. It is just a feeling of pure joy for me,” said Hastings.

His fascination with the sport was born at age 13. Hastings started not on a course, but at his summer camp, Fusion, in Wilmette. There, he began tossing discs with his camp counselor. After getting the feel of it, Hastings went out to try the real thing.

The first course he played was the Fairfield Course in Round Lake, Illinois. Hastings’s curiosity turned to a passion there.

“When I arrived, it took my breath away and that was when I knew that I wanted to play more,” said Hastings.

Now 17 years old, Hastings competes at the national level. Having played in 28 different tournaments, Hastings is a seasoned player. Last summer, Hastings competed in his biggest tournament yet, The Memorial, where he competed with 5 players who are top 50 in the world. Hastings took third place, falling short of first by only two strokes.

Hastings is proud but not satisfied yet. He is ready to reach beyond that.

“I was definitely upset after the tournament because I thought I could have done better, but I was still happy with my finish.”

Major companies in the disc golf world have taken notice of Hastings’ skill. DiscMania, a company out of Finland, chose to sponsor him. DiscMania sends Hastings all the discs and disc bags he needs to ensure he will be capable to compete in the pro circuit when he is 18.

So what’s next for Hastings? In the years to come, he plans on competing at even higher levels.

“My goal is to hopefully take disc golf more seriously in college and try to compete in the major multi-day tournaments that I don’t have time for that right now. That would take a leap to the professional scene,” said Hastings. “I have already been playing against pros, so I hope the jump will not be that significant.”

To make it to the professional level, Hastings plans to work on his consistency.

“For me, I have the shot types. It is just becoming as consistent as possible and that is where practice and experience shows their value.”

One such shot type is an upshot, which is when a player’s second throw is tossed with a high loft and meant to drop right on the basket or next to it.

“I do a lot of upshot practice at Watts park in Glencoe. It is a shorter course in comparison to most of the ones out there, but still has some touchy shots that help me with my upshot game on longer courses.”

With  winter here, Hastings will not be able to play nearly as much, but he will continue to condition for the coming spring.

“I try to give my arm a break during the winter, but I usually just do some putting practice to keep in touch with my form, and a quick round every now and then,” explained Hastings.

“A big part of the winter for me is focusing on staying in shape.”

When starting up again in the spring, it is likely that Hastings will have company when he practices. Disc golf is quickly growing in popularity.

Multiple players attribute the spike in popularity to the Coronavirus pandemic. With most sports shut down, disc golf has flourished.

Junior Jack Mulvaney agrees that there has been a huge increase in local interest in the sport.

Hastings is ecstatic to see the growing popularity. He believes that the benefits of disc golf over ball golf are another reason for the recent surge in players.

“Disc golf has the potential to become something huge. Unlike golf, you do not need expensive clubs nor do you need to pay to play.”

The accessible nature of the sport has created a communal atmosphere. Instead of private courses, the game is played on public fields often mixed with other activities.

“The disc golf community is an incredibly friendly community that anyone can join and feel instantly welcomed.”

High flying Hastings noted the importance of friendship on the course.

“I play for fun all the time. I love trying to play with new people and I try to share my joy of the game with them so they will continue to play.”