How Snow Days are Decided at New Trier 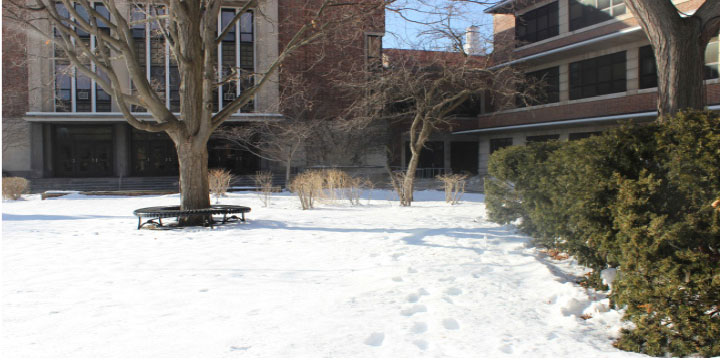 Although the winter season brings on snow, ice, freezing temperatures, and terrible drivers, there is one redeeming quality for kids still in school: the possibility of a snow day.
Whenever it snows, students always begin to hope for a snow day. Most of the time, the snow day isn’t given, resulting in blame being put on the staff.
Students usually tend to blame the principal or the superintendent, when in reality, according to the principal Denise Dubravec, “There are multiple administrators who are involved in the discussion and decision-making, including a discussion with our sender schools.”
When snow day talk beings to fill the school, each student has a different reason why they think school will ultimately be cancelled. Many think it’s because of how far away some teachers live, whereas others think it’s because of timing (if it starts to snow late at night the roads probably won’t be cleared by morning).
Dubravec revealed that cancalling school happens for a combination of reasons. “The safety and well-being of students and staff is our priority,” said Dubravec. “We consider the following when approaching a possible school closure: severity of the weather, timing of the weather conditions, and the ability for cars and buses to travel safely to and from school.”
It was rumored that school wasn’t canceled on Thursday, Jan 8 because of the impending construction start date and the staff not wanting to put off the start date any further.
Dubravec put an end to these rumors by emphasizing the safety of the students when she said, “Our priority is always the safety of our students. The construction schedule does not factor into our decision-making protocol for weather or other emergency closures.”
Students were mostly positive about taking a snow day. Junior Charlie Collyer said, “I love snow days. I realize that we get another day of school, and I don’t mind that at all.” While some students said that making up the school day can be a real inconvenience, senior Jacqui Gossard said, “A surprise day off is way better than a scheduled one, even if that means making it up later.” Georgia Caras, sophomore, disagrees, “Snow days are nice for a few hours, but there’s always that day in the middle of June where you’re like, ‘well instead of having summer fun, I’m studying for my chem final. Winter sucks.’”
The one opinion that all of these students agreed on was that this last snow day was not necessary.
When snow days are called at New Trier, all of the days that are missed must be made up. Loyola and even some feeder schools add extra school days to their calendar in order to be able to miss school without having to make up snow days.
It may seem that New Trier doesn’t follow this strategy, Dubravec, though, said, “Every school in the state is required to add five emergency days to their school calendar. We have one at the end of each semester, which is a grading day and the other three are added onto the end of the calendar that we submit to the state.”
In a way, grading days are New Trier’s two “safety days” to prevent having to add extra days onto the school calendar at the end of the year.
Although the state as a whole tends to experience the same weather phenomena, individual schools are almost always in charge of whether or not the school opens. “In general the decision rests with the local school districts. The state governs the number of normal attendance days and emergency days schools must build into their calendars,” said Dubravec.
Many students engage in various superstitions in order to make a snow day a reality, like flushing ice cubes down the toilet, putting snow in the freezer, sleeping with spoons un-der their pillows and wearing their pajamas inside out.
Before you start hoping for any of these things to work, remember that school is only canceled if the weather interferes with the “safety and well-being of the students and staff.”