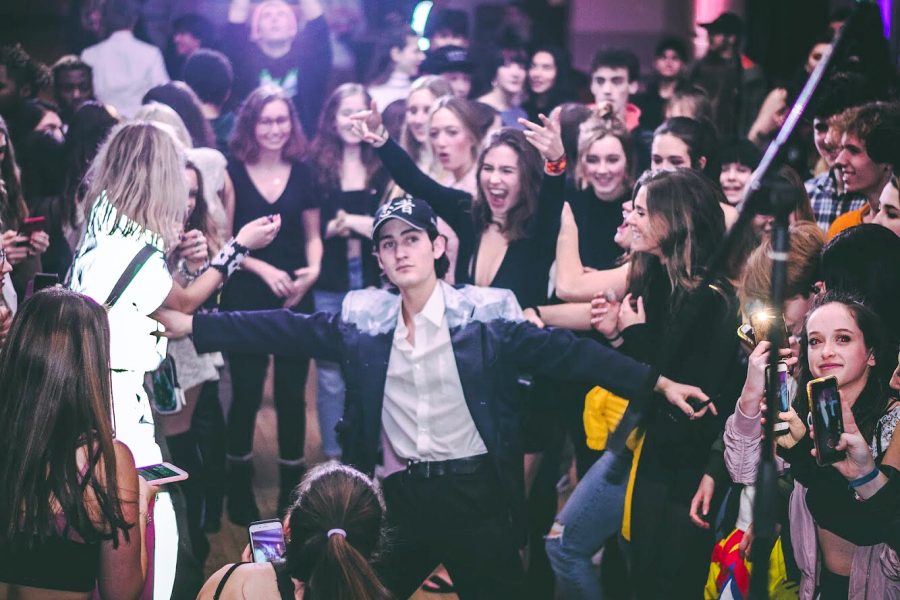 At 8:00 pm on Saturday, Dec. 15th, spectators flooded into the Masonic temple that had been transformed into a pop-up shop, runway, and concert venue.

As they took their seats, the overhead lights dimmed, leaving only the light emanating from the exit signs and a traffic light, reflecting off a row of adjacent traffic cones near the end of the walkway.

Hard-hitting, drum sounds clamored throughout the room, queuing the models, and the audience quieted in anticipation.

Senior Victor Pearlman watched from the side as the show he’d been planning for months came to fruition.

Models clad in his chaotic designs strided confidently through a translucent tunnel so that only their sillhouettes were visible until they emerged from the aisle at the end of the walkway.

Every so often, they’d place a Juul onto a black pedestal and walk back in the other direction.

“It was really exciting and professional. The outfits were amazing,” said Senior Claire Zoller who attended the event in support of Victor and her friend walking in the show.
Part popup shop, part fashion runway, and part concert, the event called “Dec. 15” was a self-described ‘multimedia marketing event’ and the culmination of everything Pearlman has learned throughout high school.

“It felt like a form of closure for me,” he said. “It’s my last event before I graduate, and I got to apply everything I’ve learned about multimedia, entrepreneurship, marketing and art into one event.”

“Throughout my life as a creative, I have been faced with constructing purpose out of the chaos that is daily life,” he wrote in an Instagram post promoting the event. “I’ve always been told in school that my presentation of my art and my work has been chaotic or messy.”
“Dec. 15” is about “redefining the essence of our anarchic lives,” he wrote.
And inspiration for various aspects of the event came from different elements throughout Pearlman’s life.
“I used used every day materials that are not conventionally used in clothing, including life vests from airplanes, tyvek, and materials from my grandma’s couch,” he said.
“And the words that the models were saying came from something that Eva Schneiden and I wrote inspired by ‘The Four Steps of Analyzing Art’ that one of my teachers showed me,” he said.
Senior Eva Schneiden and Pearlman combnied the Four Steps of Analyzing Art with the 12 Steps to Quitting that the models read– a juxtoposition meant reflect on the event’s use of art to condemn Juuling.
At the conclusion of the runway, Pearlman walked up to the black podium where a small pile of Juuls had gradually collected throughout the show. He raised a hammer above his head and brought it down upon the Juuls as the audience cheered.
Senior Ross Johnson said, “I respect Victor a lot. I couldn’t make his previous events, but I thought this was cool. You could really tell that he put a lot of planning into this.”
Victor felt it was importnat to spread these messages agaisnt Juuling because he sees it as a more accessible version of cigarettes.
“It’s getting high school students who wouldn’t normally be exposed, addicted and it’s messing up people’s lives.”
In addition to the anti-Juuling message, Pearlman also sought to make a statement about gender norms in fashion.
The event marked the release of his new brand, “Victor Pearlman,” which included multiple gender-swapped pieces that he hoped would subvert the audience’s understanding of gender norms in fashion and in society.
“I had a lot of the guys wear skirts and a lot of the girls wear business or industrial workwear,” said Victor.
Model Ryan Kochman appreciated the collection’s rejection on gender norms.
“We are trying to redefine gender norms and get rid of the misogyny that this church somewhat embodies,” he said. “It’s a Microcosm of everything victor has done so far,” he said.
“I mostly just want to create a vibe,” said Victor. “I don’t make decisions and choose models based off of who’s the most beautiful, I make it based on who will add to the vibe, who’s going to create the best environment.” he said.
“That’s ultimately what I’m striving for. I do these events because I want to create opportunities to bring people together.”