The long road back: What it’s like to have COVID-19

The emotional toll is just as damaging as the physical 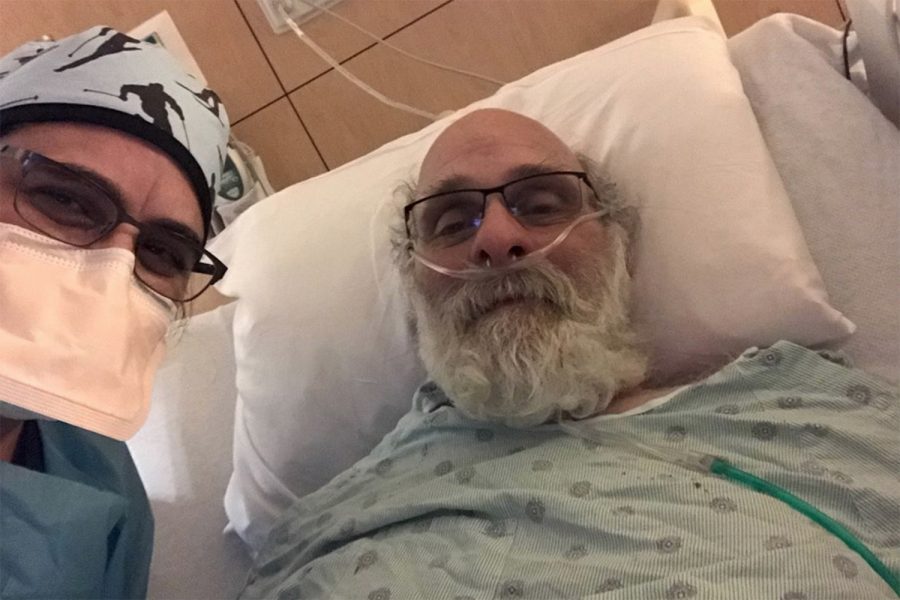 Dr. Halleh Akbarnia (left) poses with Catania (right) shortly before he was discharged

For 68-year-old New Trier substitute teacher Michael Catania, the road to recovery from COVID-19 has been long and challenging, but also filled with kindness and support.

Catania first began feeling sick on Mar. 11, but it only seemed like a bad cold, so at first he didn’t suspect anything out of the ordinary.

“I got this cough that would not quit. It came with a rolling headache that got better then worse then better again. There was also a low grade fever,” said Catania.

After 10 days of feeling sick, Catania called his doctor, who prescribed an albuterol inhaler and recommended that Catania come in for a nebulizer treatment.

“I went in and got the treatment around the second week of March, but I was not tested [for COVID-19]. I took the treatment, got the inhaler and went home to try and recover,” said Catania.

But his condition didn’t improve. On Monday, Mar. 23, Catania was admitted to the Advocate Condell Medical Center in Libertyville, but even then he didn’t realize the severity of his condition.

“I was admitted to the hospital with COVID-19 and pneumonia. I was very, very sick and had no idea how sick I was. I had driven myself to the hospital,” he said.

Catania remembers little from his time in the hospital, because he spent a majority of it in a medically induced coma and on a ventilator.

“The things I do have flashes of memory from are often jumbled and bizarre. It is almost impossible to tell reality from imagined since I was in that drug induced state for so long,” said Catania. “I do have a limited number of flashes of memory of quite unpleasant feelings of not being able to breathe and, because of the tube, being unable to communicate.”

One thing Catania does remember clearly was how caring, considerate, and effective his medical team was throughout his recovery.

“There is not much dignity left when they are busy saving your life, but this group did everything they could to preserve and protect what dignity I had left,” Catania explained.

Catania spent a total of 15 days in the hospital. Over the course of this time period, he lost approximately 15% of his body mass.

“I was so weak on the 10th day in the hospital that I had to learn and practice how to stand up and, with a walker, walk again,” said Catania.

Even though he was discharged from the hospital on April 7, Catania still has a ways to go before he has fully recovered and returns to his full strength.

“It is a very long process and will take some time, but my goal is to work toward eventually 2,000 steps and then 3,000 steps and be able to walk the one mile route around the local rock quarry turned into a park,” said Catania.

For both Catania and his family, one of the most difficult aspects of his time in the hospital is that they were unable to see each other.

Catania said, “This was hard on me, but I expect it was harder on my 5 kids, 10 grand kids, and my wife of 46 years. I neither saw nor spoke with any of them for the entire 15 days until I got my phone working toward the end.”

Catania explained that having COVID-19 is challenging mentally and emotionally in addition to physically.

For this reason, Catania appreciates all the effort that the hospital staff put into making sure he knew he wasn’t alone.

“There is clearly a need for mental health and emotional support. The patient is alone because of the nature of the disease. They can have no visitors, they can see no one and no one can see them. The hospital staff did their best to assure me that as long as I was with them, I was their family. That helped,” said Catania.

All the support from the community Catania has received has also been a crucial part of his recovery process.

“The outpouring of support from colleagues, students, former students, advisees, and even parents has been a truly enriching and humbling experience. That support, which came in so many different ways, was life affirming and critical to my recovery efforts. I am deeply grateful for all of it,” said Catania.

One message that Catania has for others is that this virus is insidious in nature. Catania is unsure how he may have contracted it, and emphasized that it is crucial to adhere to social-distancing and preventative guidelines.

“I had been nowhere, met with no one, was introduced to no one I didn’t already know, never traveled out of the state. I have no idea where the disease came from,” said Catania.

According to Catania, COVID-19 is an intertwined problem that requires everyone to work together to address it.

“Follow all the rules. Watch your spacing, wear masks, try to remain sequestered until they either get a handle on it or a vaccine for it. Whatever you do, don’t pretend that it is fake news or just a cold. I’m here to tell you it is way worse than a cold and very hard to beat. Take it seriously, please,” said Catania.