Sharing pronouns is becoming more common; including them in Zoom names could make it regular thing beyond Zoom 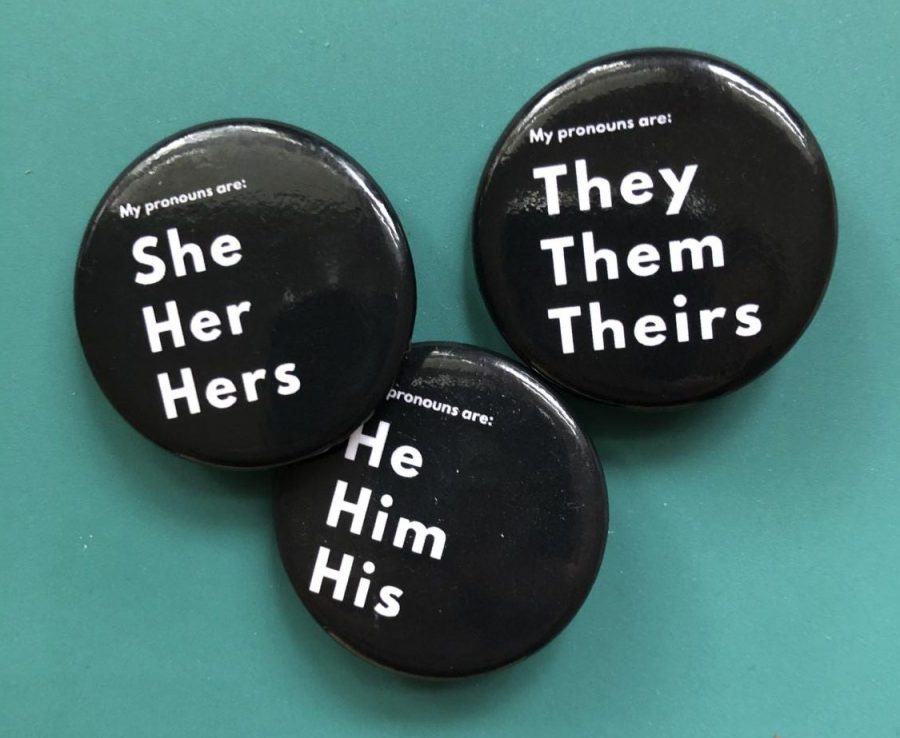 These pronoun pins, given out by health teacher Andy Milne, are another easy way to share your pronouns

In an effort to share pronouns, many people have added their pronouns to social media sites, specifically advocating for inclusion in Zoom names.

Sharing pronouns has become increasingly more important to accepting non-binary people, and students say the practice shouldn’t be forgotten even if we’re not meeting face-to-face.

“It’s really important because then everyone can clearly see what their pronouns are and respect them,” senior Maya Crystal said.

Many students recognize this, and those who don’t often don’t know enough about it. People who don’t think about their own pronouns are less likely to feel the need to indicate them. Almost everyone is guilty of this for at least some period of time, including English teacher Leslie Birdwell.

“A person of privilege doesn’t realize they’re privileged in certain ways, so because I am a cis-woman who identifies as female it never occurred to me. But recently I was taking a Storytelling Workshop, and when we were all asked to give our names and our pronouns somebody said something about always putting she/her on a name tag, because otherwise you’re othering people,” said Birdwell.

Crystal agreed that everyone should make an effort, and pointed out that it’s almost more important for people who have commonly used pronouns to volunteer first. She explained that “indicating pronouns might be a more complicated issue” for some of your classmates, and by sharing yours first it can make them more comfortable and “help normalize pronouns.”

Some students think that the way pronouns are currently handled feels forced and problematic. The main complaint is that students are the ones making an effort to include pronouns in their Zoom names, while many staff members have yet to do so.

“I think it sounds like [the administration] encouraged teachers to ask students about their pronouns, but they’re not telling teachers to share their pronouns. I feel like that’s one sided, putting the burden on the students, when really the teachers should be leading by example and showing how they value Equity and Inclusion by introducing themselves with their pronouns,” Crystal said.

Birdwell noticed similar problems in her own old methods. As an English teacher, pronouns come up in regards to both students and classwork

“I had this PowerPoint on how to use pronouns, and I remember one year I was doing it and a slide came up that I made years ago that said; ‘They is always plural. They is never singular,’ ” Birdwell explained. “And I was looking at that slide like, that’s just not true anymore.”

Birdwell changed this slide, and later added a question into her ‘Getting to know you’ quiz that fits student wishes.

“In the part that asks for your pronouns, I said ‘I’m she/her and also I prefer Ms. to Miss.’ I shared mine then because I figure if you’re going to ask you should share,” Birdwell said.

The result of these seemingly small actions can be huge for others, and the few seconds that go into adding pronouns to social media bios or Zoom names are all helpful toward normalizing pronouns and accepting non-binary genders.

“I think it shows students who use they/them or other non typical pronouns that you’ve got their back,” Gordon said. “And so I think that that’s a really easy way to show solidarity.”