Many teachers held in class discussions in the days following the Jan. 6 riot 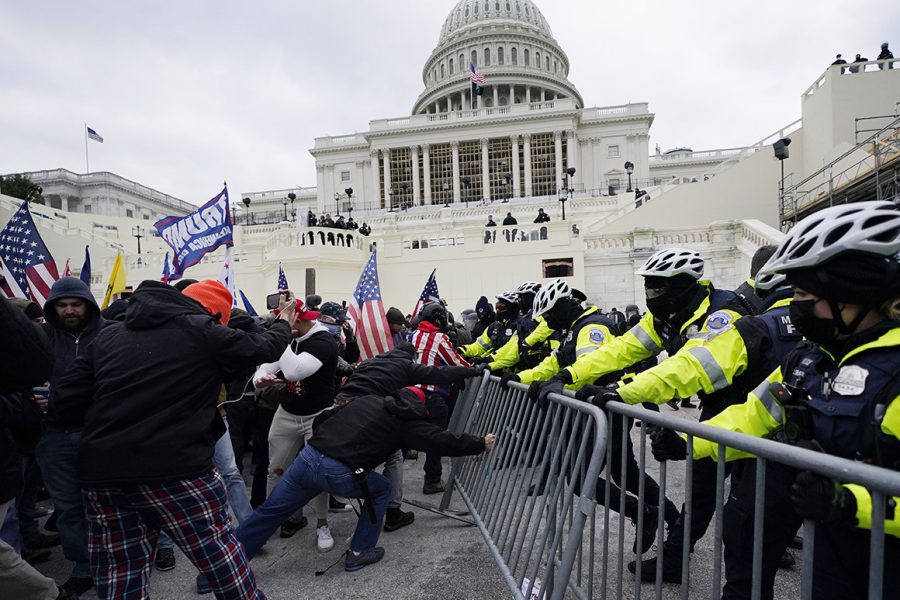 Trump supporters try to break through a police barrier at the Capitol on Jan. 6. On Jan. 7 many teachers held discussions in class about the events

In the aftermath of the Jan. 6 attack on the U.S. Capitol, teachers and students spent class time discussing not just the event, but the implications of it for the future of  American democracy.

Social studies teacher Laura Malia talked to all of her classes, including AP US History,  American Studies, and advisery, about what happened at the capitol. She feels that it is important to use class time to start such discussions.

“Social studies classrooms are good places to start discussions about such events. Teachers start conversations to give the students opportunities to discuss with each other and share their feelings,” she said.

Junior Katrina Martello agreed that it’s good for teachers to lead class discussions on current events like this. She shared that speaking about the event in her English and history classes can lead to interesting and factual discussions.

“I think it’s good for our advisors and history teachers to talk about what happened. A lot of us felt pretty confused and concerned for our country, and my advisor was pretty reassuring and comforting,” she said.

Senior Kenny Dolin also said that talking about what happened is valuable, but he finds such discussions important for a different reason.

“I think it is important we talk about this in class because the insurrection that happened at the capitol is something that will be staining our history for years to come and should not be ignored,” he said.

Teachers didn’t just lead classroom discussions, some chose a different way of having students share their thoughts. Math teacher and adviser Shana Hill made an optional assignment where she allowed students to share their feelings. Several students in Hill’s class shared feelings of fear and disappointment.

“It was really moving for me that my students didn’t necessarily want to talk about it in a big setting, but they did want their voice to be heard. That made me feel glad that I gave them that opportunity,” she said.

When topics involve politics, some students and teachers feel uncomfortable due to different opinions in the classroom. Junior Grace Yoo said this polarized atmosphere can make class discussions volatile.

“To my knowledge, a percentage of the student body identify as supporters of President Trump. Considering how the events at the Capitol were instigated by a group with similar affiliations, I doubt that those students would be perfectly at ease [to discuss],” she said.

Martello also says that the differences between political views might cause discomfort during class discussions.

“I feel like students with Trump supporting families and more sensitive students definitely would feel uncomfortable as most students here support Biden and they probably fear students will put them in the same category as supporters who stormed the capital, and it’s also a really intense topic for sensitive students to think about. It probably added to the fear they already felt,” she said.

Junior Anna Mathy said that most students in her classes talked about the topic very generally to avoid confrontations.

“In the discussions that I was in, they did not get heated and most people did not voice their own political opinions. Instead, there was a consensus that this never should have happened,” she said.

Not only do most students choose to avoid making claims that would expose their political views, Martello said that most of her teachers also chose to approach the conversation without personal bias.

“My teachers were good and careful about not letting their political beliefs and who they support show,” she said.

While some students do support former president Trump, there is a consensus among students against terrorism and the riot at the capitol. Yoo said that no one in any of her classes showed support for the violence that unfolded.

“Among those who chose to speak, all were relatively united in their condemnation of domestic terrorism.”

Even though most teachers chose to not share their political leanings to avoid conflict, Malia finds different opinions valuable.

“Social studies courses involve those issues. We talk about difficult topics. I believe that it’s a part of the learning experience. Not everyone is going to have the same political viewpoints. But we have difficult conversations about what’s happening in the news. I think it’s important for the students to process that,” she said.