Board of Education candidates canvas voters through virtual meet and greets 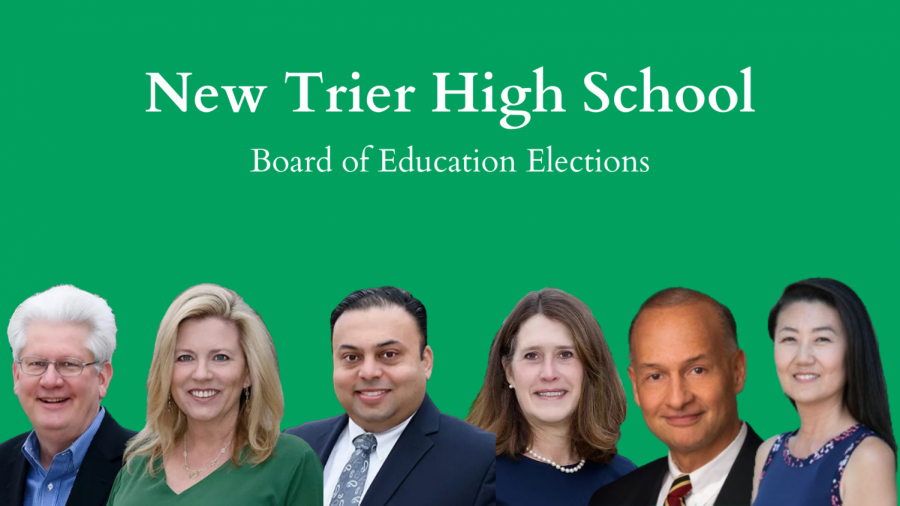 Starting April 6, voters will be able to cast their ballot in the 2021 municipal elections, which includes open seats on the Board of Education. Out of six candidates for the board, four will be elected.

The candidates consist of four candidates under the coalition Top4NewTrier and two unaffiliated candidates, Julie Cho and Chad Prodromos.

The first four candidates on the ballot, Keith Dronen, Kimberly Alcantara, Avik Das, and Sally Tomlinson, all banded together to form Top4NewTrier after being endorsed and slated by the non-partisan New Trier School Board Caucus.

During a Top4NewTrier-sponsored meet and greet on March 8, students laid out several concerns that were important to them and issues they hoped would be addressed under the elected candidates. The students brought up topics including mental health, racism, the coronavirus response, and sexual abuse. Top4NewTrier felt they were benefiting from hearing the concerns of students and what is important to them.

“I think students being aware of what topics are being discussed and seeing sometimes the complexity of what goes into those decisions is very important,” said Alcantara. “As far as just the campaign in seeing what people want, the four of us, the Top4NewTrier candidates started holding Zoom meet and greets since February. And by April 6, we should have held about 17 of them.”

Candidates like Cho believe that all student issues are interconnected in many ways, especially regarding race and privilege, and that the board members have to do a satisfactory job communicating with students to find and identify these problems to be able to solve other concurrent issues in the school altogether.

“I do not feel that our concerns are being heard and addressed adequately, and there really is a lack of effective two-way communication system between the board and the families,” said Cho. “My first task will be building an effective two-way communication system, and providing a safe environment for students and families to openly discuss their concerns, that will be reflected in the board decisions.”

The skill sets each set of candidates bring to the table are also considered and can be decisive for an election like this. All candidates bring significant experiences. Alcantara is a lawyer and has experience as a previous District 39 Board member, Das is a Cook County juvenile probation officer, Dronen a financial adviser, and Tomlinson a budget/financial manager.

“We bring skill sets and personal experiences, family experiences, promote professional and volunteer backgrounds that really complement each other and also complement the existing school board members that are continuing on the school board,” said Alcantara.

The unaffiliated candidates hope to use their personal experience in the medical field to cut out fees that would normally be used to consult doctors and medical professionals. Prodromos used to work as an assistant professor of Orthopaedic Surgery at Rush University and founded a medical nonprofit, while Cho was a professional health care consultant.

“My primary goal as a District 203 Board Member is to use my COVID-19 medical/scientific expertise to serve as an unpaid consultant to the board to guide it, and the entire New Trier community, through current and future issues related to COVID-19,” said Prodromos on the League of Women Voters of Wilmette website.

According to Cho, her experience as a consultant is a valuable asset on the board as it can translate to hearing out students’ issues and what they want accomplished by the board.

Although the first four candidates have banded together by virtue of being slated by the New Trier School Board Caucus, they had first met only in November. Since then, they’ve gotten to know each other and determined how they would run for the election in the upcoming months, being brought together to “ensure the excellence in education and responsible stewardship of the school” as well as upholding the strategic plans in place for the years to come, according to Alcantara.

According to Das, their alignment with the New Trier 2030 strategic plan makes them stronger as a board because it’s apparent where the board is headed as long as it serves the plan as a whole and the students. He also said how reflecting on how they are doing can be achieved by looking at the plan and seeing how thoughtful they have been in implementing everyday decisions that work towards it.

The New Trier School Board Caucus is made up of citizens from six feeder districts into New Trier with over 45 delegates who vote on which candidates they think will best fit the role of Board member based on past experiences, attentiveness to student concerns, and possible cooperation between other Caucus-endorsed board members.

“Each of us that applied for this position had to fill out an eight page application form, provide letters of recommendation, and then interview asking or answering the same set of questions among all of the candidates,” said Tomlinson.

From now until March 21, voters can register online and go to several polling places to register to vote early as well. Students and voters will be able to learn more about the candidates during Wilmette’s Virtual Candidate Forums on March 20 at 11 a.m. which will be hosted by the LWV Wilmette and the Wilmette Public Library.

“Those forums, the meet and greets in particular, have really been very informative to us. We’ve really been able to hear people’s questions, candidates and as you know, a student forum as well,” said Alcantara.