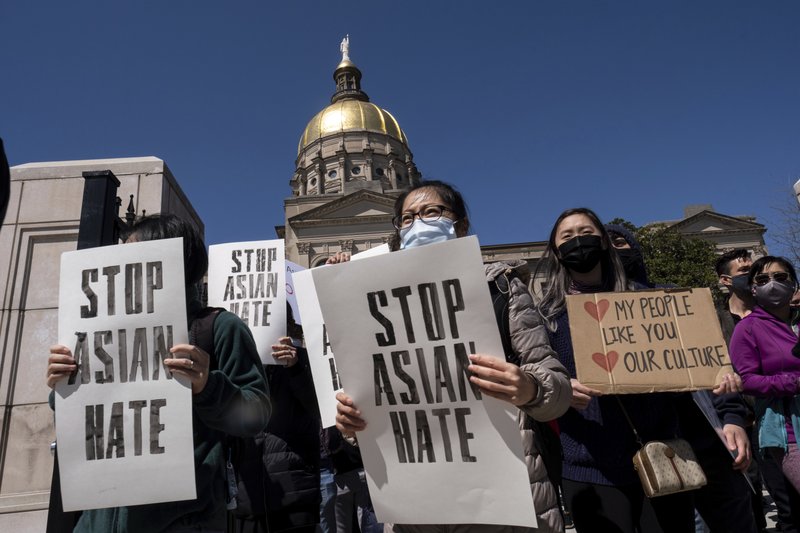 Over the past year, violence and racism against Asians has been on the rise. For the Asian community, the March 16 shooting which targeted three spas in Atlanta, where six of the eight killed were Asian women, was only another reminder.

A report from the Center for the Study of Hate and Extremism found that there was a 149% increase in anti-Asian hate crimes, while hate crimes overall decreased by 7% in 2020.

While senior Miguel Alano was already well aware of the increase in hate crimes against Asian Americans since the beginning of the pandemic, he said the recent shooting made him feel even more cautious.

For senior Daniel Martinez, the shooting, and the increased coverage of racism directed towards Asian Americans in general, has left him confused as to how to process it all.

“I think before when I thought of racism it’s always been between Black and White and I feel like Asian racism [hasn’t always been] seen a lot, and now because people are beginning to get brutalized and assaulted, the spotlight’s on us,” he said. “And I’m kinda in a weird place because I don’t know how to deal with that.”

Art teacher Susan Kwon agrees that the recent shooting was definitely alarming but that, being a Korean-American woman, she already lived in a state of heightened self-awareness.

“I certainly have a heightened sense of self-awareness and my surroundings when I leave my home, but this feeling is not new,” Kwon said. “I have been conditioned to process verbal harassment or hostile encounters through the lens and intersection of race and gender.”

Thus far, the police department in charge of the Atlanta shooting investigation has refrained from labeling the shooting a hate crime which has frustrated many people in the Asian community.

“I just think it’s unacceptable that they’re dancing around the subject. How can they not say it’s a hate crime when they literally went to all Asian-owned spas and killed six Asian women,” said senior Victoria Chan.

But this passivity or rejection of the Asian struggle doesn’t shock English teacher David Rhee as it’s an attitude that has been present throughout history from the treatment of the Chinese people who worked on the transcontinental railroad, to the Chinese Exlcusion Act, to the Japanese internment camps during World War II.

“Ultimately, when you look at the history of Asians, our narrative was always erased from American history. Our lives have always been erased because we have never been seen as the same level in terms of being human,” said Rhee.

Since his arrest, the shooter, who is White, has insisted his actions were not racially motivated, but instead a result of a sex addiction. He claimed committing the shooting was a means to eliminate his temptation.

“I don’t think a lot of people realize there’s a really deep history of the hypersexualization of Asian women and that man was fetishizing them and wanted to eliminate that temptation and so he literally killed them. I don’t think a lot of the police are realizing that because, if you’re looking at the task force, all of them are White,” Martinez said.

The way the shooter’s actions and words seem to suggest the crime was motivated by an Asian fetish makes senior Annie Scadron even more uncomfortable.

“In our society Asian women are seen as sexual objects sometimes because we are deemed as submissive or obedient,” she said. “It just makes me so uncomfortable especially because, as an Asian woman, I need to be aware of that with other people. When I go out to the world I need to be aware of people’s motivations.”

The recent attack has also left many feeling more fearful for themselves and loved ones.

Some Asian students who are mixed race or not East Asian expressed that their sense of security essentially lies in how “Asian” they look.

“Before Covid, I wasn’t scared to get hate crimed, but now I actually am and every time I leave my house I think about that and I’m worried because I look Asian,” said Chan, who is mixed race with Chinese and North African descent.

But Scadron explained her mixed race identity – being White and Filippino – can sometimes lead people to assume she is White while also leaving her susceptible to anti-Asian racism.

“I am mixed race and I do have light skin privilege. To some people I would be White casting so I feel safe because not everyone can figure out what my ethnicity is,” she said. “It’s just so funny how, as someone who identifies as mixed race and technically can be White casted can still get racism for being half-Asian.”

“As a whole, I think racism itself has become more intense in the past few months and that worries me because I think that will affect all minorities no matter what they look like,” Gupta said. “And Asian hate affects all Asians no matter what they look like. So I feel like [the increase in anti-Asian violence] really worries me, but I do think there is a bit of a disconnect just because I’m South Asian.”

While expressing some heightened fear due to the events of the past year, Alano emphasized the anger he’s felt especially with how the elderly Asian community have been targeted.

“For those people who don’t know, the elderly are very respected in our community. We hold them in the highest regard. They are so close to our hearts,” he explained. “As Asian American people we are under the label of the model minority and that makes people think we’re supposed to be submissive, we’re supposed to be quiet about these issues, we won’t speak up. It angers me because they target elderly because elderly people will not speak up for themselves.”

In addition to the model minority myth reinforcing an anticipated submissiveness from the Asian community, art teacher Tom Lau feels a lack of clarity as to what is or isn’t a hate crime may also keep people from reporting it, including himself. Though he was sure it was racially charged when a passing biker spit on the ground in front of him, there was still a lingering uncertainty as to how to interpret the act.

“With the Asian community, there aren’t symbols like a noose for the Black community or the swastika for the Jewish community. So, oftentimes I feel like I’m left asking whether that was racist or was just someone being a jerk. So it can be difficult to differentiate,” Lau described.

Alano expressed his frustration with how many people are passive to Asian – and all POC – struggles despite gladly enjoying their culture.

All agreed that education and the amplification of Asian voices is key to combating this rise in racist rhetoric and hate crimes directed towards Asian Americans.

“I feel like our country has been wounded really deeply by the Trump administration and his racist comments that have been going on for four years. But I don’t think it’s hopeless for us. I think definitely just educating people more about these attacks against Asian Americans [would help] and trying to teach people that these [things] are wrong because obviously not all Asian people have covid and we didn’t bring covid. That’s ridiculous,” Chan said.

Rhee thinks Americans also ought to be more in tune to the abuses being inflicted upon Asian Americans instead of waiting for something like a shooting to happen to pay more attention.

“The fact that it took six Asian women [to be killed for people] to be like ‘Wait, what’s going on,’ even though it’s been happening, speaks volumes to me,” said Rhee. “There has to be an acknowledgement [and] a true understanding of the racism towards Asian people.”

Lau also thinks it’s key that more Asians find the courage to speak up instead of remaining silent on their experiences, breaking apart from the model minority myth.

“Finding ways to access people’s stories is an important way to understand what’s going on in the Asian community if you’re not Asian,” he said. “And I think Asians in general need to learn how to take up more space. I think for too long, Asians have been too willing to let things slide or not be loud. And I think it’s time to be loud and to be present and to amplify our own voices.”

Alano echoed Lau’s point and also emphasized the importance of all groups being united against racism so that progress can be more quickly and effectively realized.