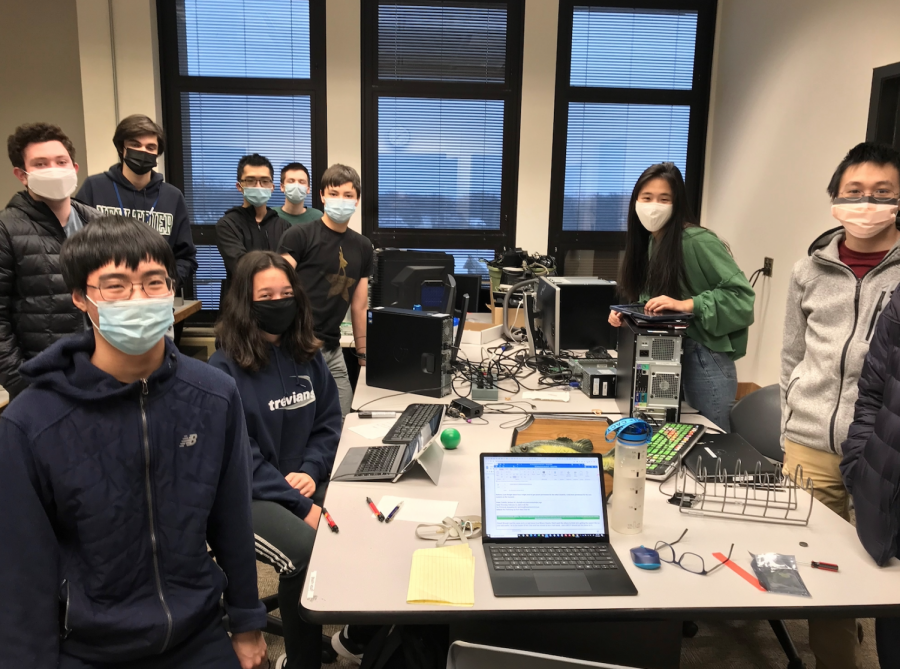 Members of the BinaryHeart Club stand around their workstation filled with computers, monitors, tablets, cords, and wires.

On March 11, the BinaryHeart Club was honored at the virtual annual recognition event of the Volunteer Center, a North Shore non-profit volunteering organization, for its  outstanding work as a youth-based service group.

A representative from the Volunteer Center sought out to find a unique service group in the NorthShore community led by young people dedicated to helping others and bestowed the award upon the Binary Heart Club.

“The purpose is to provide digital access to those who don’t have the means by donations from the community,” said club co-leader Chris Klimkiewicz.

The BinaryHeart Club, which started in 2018, collects donated broken or unused devices, refurbishes them, and then sends them to schools or community centers throughout the Chicago area. The club has mainly focused on repairing computers but is currently looking into adding tablets and other devices to its catalogue.

According to Jaqueline Pritchard, club co-leader, this year, given the circumstances, it has been a slow start for BinaryHeart Club. The club hasn’t been able to be in full swing this year, having to deal with kids remote while also managing a relocation to a new club room.

“I think [the award] reminds us in a very visceral way why this club exists,” said Pritchard, “It was really good for us…to be reminded of why we do this and to keep moving forward, even though it’s been a very difficult, challenging year.”

“Binary is a language in which a computer interprets things…And the heart is giving back to the community,” said Klimkiewicz.

According to Pritchard, the destinations of these devices tends to vary.

“Sometimes they reach out to us. Sometimes, we’re trying to find places where we can place the devices where needed,” says Pritchard.

In the past, BinaryHeart Club has collaborated with refugee centers, other service clubs at the school such as tutoring clubs, and Northwestern Settlement, a Chicagoland organization committed to ending generational poverty.

The other award winners included Annice Moses, from Imagine Englewood If, an organization devoted to creating safe, positive spaces for Chicago youth to learn and grow. Another award recipient was plastic surgeon Dr. John Warner who, in addition to doing plastic surgery operations, leads the Warner Institute in providing high quality surgical teams to people in need.

Club leader Andrew Gill described the profound impact the award had on his outlook of the work the club is doing.