“Stick to sports?” Athletes are speaking out more than ever

Politics have entered sports, and they’re not going away 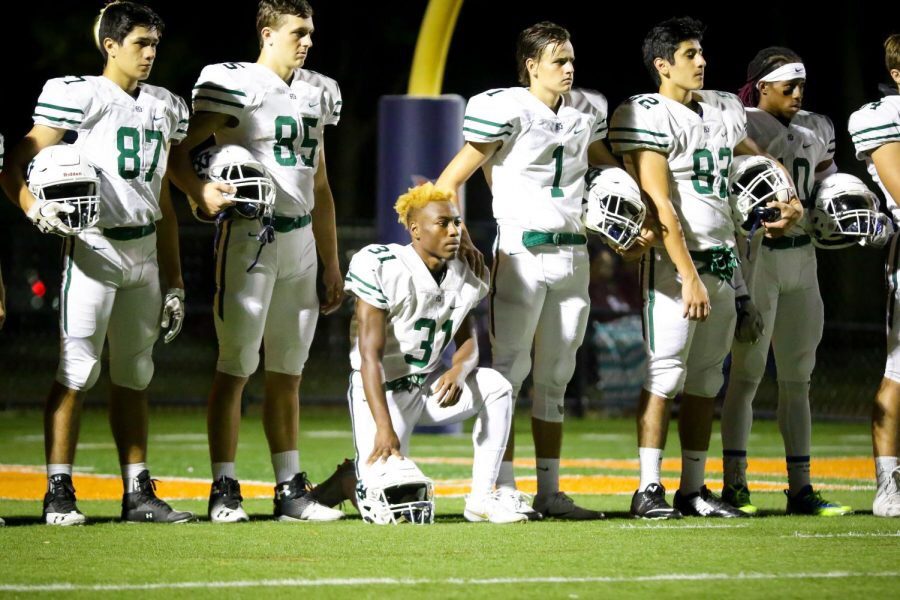 In 2018, politics are a part of everything we do. It seems the world of sports is no exception.

Most significantly, NFL players have made their voices heard on the political landscape by taking a knee during the national anthem as a form of protest against police brutality.

It began with Colin Kaepernick (in August of 2016), then of the San Francisco 49ers, and has spread to much of the football world–including New Trier football.

“What motivated me most to make this decision was mostly Kaepernick and his strength to stand up for what he believes in no matter the outcome,” said senior Jonathan Taylor, who is currently the only Trevian to kneel.

Taylor began taking a knee at New Trier’s victory over Evanston in September of 2017, after the team was told during the week that a good amount of the Evanston team would be doing the same.

Head coach Brian Doll fully condoned Taylor’s decision. “It’s one of those things where we’re supportive of him,” he said at the time, per Pioneer Press. “He’s a great kid, he plays for us and does a great job on the field and off the field.”

Added Taylor, “My coaches and teammates have been extremely supportive throughout the entire process.”

Kaepernick’s protests and the mass demonstrations that occurred in the following months and years were met with outrage and a variety of rebuttals. They ranged from “If you don’t like it, you can leave” from conservatives like President Trump to Kaepernick’s former coach in San Francisco, Jim Harbaugh, saying that he supported Kaepernick’s right to protest and his motivation for doing so, but that he “takes exception to” his methods.

The most prominent message, however, comes in the form of the phrase “stick to sports,” implying that players, teams, and leagues should stay out of politics completely.

Both sides of the aisle have utilized this tactic. On the left, many criticized then-Bills head coach Rex Ryan for introducing then-candidate Trump at one of his rallies. And on the right, Fox News host Laura Ingraham told NBA superstar LeBron James to “shut up and dribble” when James spoke out against Trump.

There is also a debate over whether or not the teams themselves should get involved. For example, the NHL’s Nashville Predators were shunned when they as an organization endorsed progressive mayoral candidate David Briley.

The concern with teams releasing official statements like this is that they–intentionally or unintentionally–suggest that the message being conveyed speaks for everybody affiliated with that team, which is not true in the vast majority of cases.

In questioning whether players should speak out like this, however, one has to consider the position they’re in. Whichever party or belief system they align with, professional athletes have a platform that allows them to speak directly to millions of people. And when there is a cause or issue that they’re concerned about, many of them tend to use that platform to highlight them.

In the words of Taylor: “I wish to bring attention to people about how everyone in this country is just not treated the same way. Our flag and anthem represents equality for everyone, but that’s not what everyone gets.”

It’s clear at this point that “sticking to sports” is all but impossible. Players are more and more conscious of social and political issues all across the spectrum and they’ve made it clear that they’re not going to stop, and recently they’ve been given encouragement from the very top.

“I encourage all of you not to stick to sports,” said NBA commissioner Adam Silver, per The Hill. “Embrace [speaking up], celebrate it, and let’s use it to build bridges and bring people together.”

In turn, we should let these athletes make their voices heard without fear of backlash. Freedom of speech is guaranteed by the constitution and that does not exclude professional athletes who kneel for the anthem or support a particular candidate.

After all, despite their fame, athletes are citizens, too.