Russia is not the Soviet Union, Putin is not a Communist

A concerning number of American's believe Russia is the Soviet Union 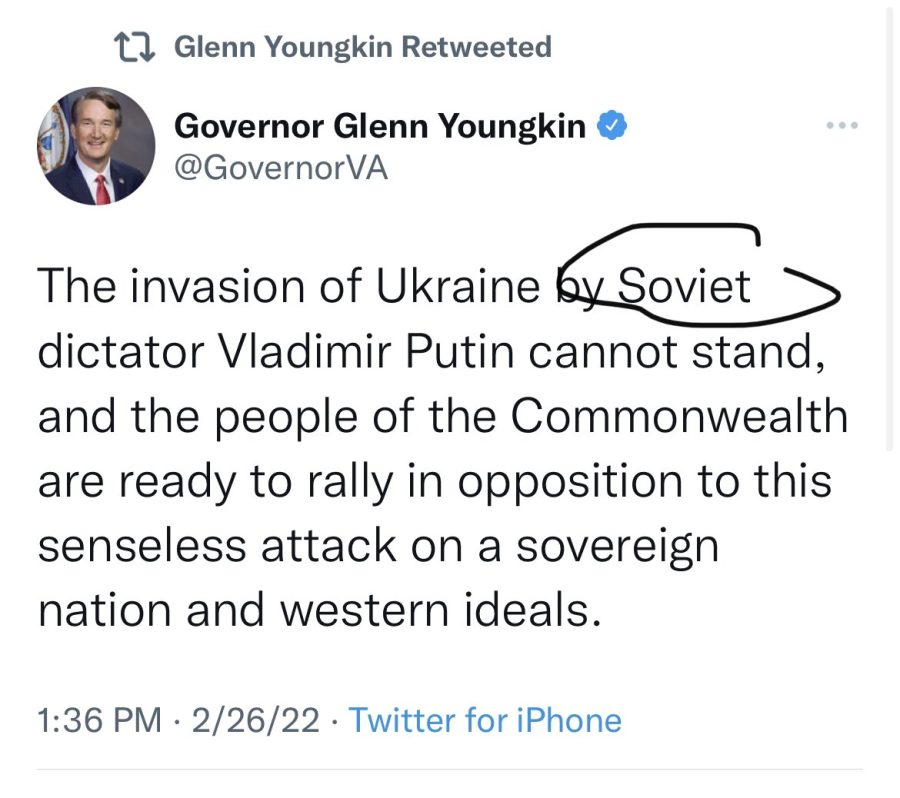 An insane and false tweet by Governor Glenn Youngkin of Virginia

In response to Russia’s invasion of Ukraine, many Americans, media outlets and politicians have traveled 30 years back in time to blame the Soviet Union.

Republican Governor Glenn Youngkin of Virginia tweeted out on. . . that the invasion was “by the Soviet Dictator Vladamir Putin”.

This is just plain wrong. In a concerning poll conducted by Newsweek, 56% of Trump voters claim that the country and Putin are Communists. So let’s clear the air.

The Soviet Union collapsed in 1991. Since then, the Soviet Union split into 15 separate republics—Russia the largest. Russia has since been dominated by capitalist policies under the largely dominant “United Russia” party. Natural gas and oil industries in Russia have all been denationalized.  The increase of market forces has transitioned Russia to a mixed economy.

Their party has rejected socialist economics in favor of conservatism and nationalism. A former KGB officer, Vladimir Putin rose through the ranks of the party making deals with billionaire oligarchs and destroying those opposing him. Putin has been in power since 2000.

Putin has ruled Russia as an ultranationalist. His rhetoric of expansion that has been found in his recent speeches is rooted in his belief that the 14 other ex-Soviet-Republics are rightfully Russian. He insists that they share a common nationality that should not be separated as it is.

Although Putin has interest in conquering old soviet satellite states, he has no intention of bringing Russia back to a socialist economy under the Communist banner. He has historically arrested many communist dissenters and said that he wished the 1917 revolution never happened. A champion of the billionaire class in Russia, Putin has driven inequality more in the vein of old Russian Tsars rather than Soviet Premier.

So to call Russia the Soviet Union is wrong on several levels. The current economy is organized completely differently, favoring the billionaire class. The political climate is the polar opposite and anti-communistic. And factually they are different countries with vastly different sizes of land.