Boys volleyball looking ahead to state

Captains and strong underclassmen lead to successful season so far 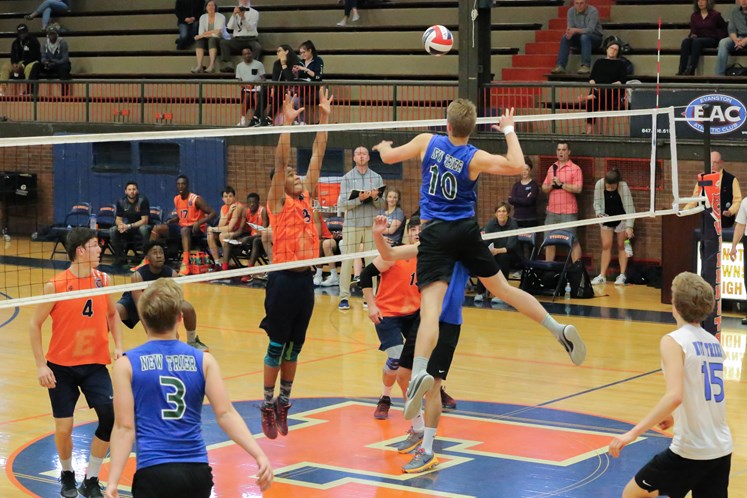 It’s going to take some growth throughout the season for the young Trevians, however. Their record of 7-3 is certainly nothing to scoff at, but compared to last season’s mark of 35-5 and first place in the CSL south, they do have work to do.

“We just have to keep improving day by day,” said Sue Ellen Haak, head coach of the Varsity squad.

“Our team is definitely hungry for a long season. We expect that we could beat any team in the state on any given day.”

The 6’6” D’Attomo has already committed to play volleyball at the collegiate level at Loyola University Chicago, which won the Division I championships in 2014 and 2015.

There is also a healthy infusion of underclassmen on the team. Jay Saravis, Colin Heath, Aaron Schatz, and Peter Brown are in the starting lineup.

The former three are Juniors while the latter, Brown, is a sophomore.

The seniors play an important role in headlining the New Trier squad.

“We have three of the best captains that have come out of the boys volleyball program ever. They bring an incredible amount of energy and experience to an extremely young team,” proclaimed an enthusiastic Schatz.

The team often plays the extremely popular video game “Fortnite,” in order to develop a relationship as teammates and bond as a group.
“We always let the senior be the party leader in Fortnite as a sign of respect,” said Brown.

“Our senior leadership is pretty important, however, the younger guys are really stepping up,” said Saravis.

Saravis paced New Trier with 35 kills and 10 aces, according to Bill McLean of the Daily North Shore.

“I don’t personally think our results have matched up with our skill because we are capable of beating some of the teams that we have played this year,” said Brown.

Since then, the Trevians have been on a tear, taking seven of their last eight contests, including rivalry matches against Stevenson and Loyola. “We have a lot of offensive weapons on this team and I think it’s intimidating to our opponents,” said Haak.

Last season, the road to a championship stalled in heartbreak, with New Trier falling to Lincoln Way East in a comeback victory for the Griffins.