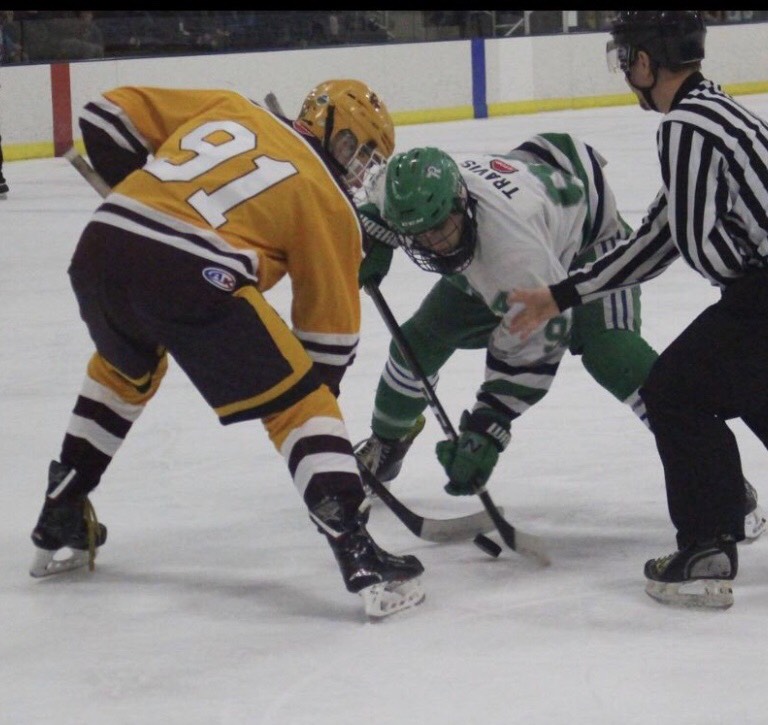 New Trier Boys Hockey’s Green Team drew a blank in the quad header against Loyola, falling to the Ramblers by a score of 2-0 on Dec. 2.

Despite a rowdy crowd, solid performance by goalie Owen Reger and heading into the game without a defeat all season, the Green team couldn’t break through after Loyola scored 39 seconds after the opening faceoff.

“The quad header was a tough game to lose, especially since it was our first loss,” said senior forward Bobby Soudan. “It’s also never great to lose in front of so many of our peers, but we won’t let that loss affect our season.”

Loyola’s first goal came immediately after an offensive zone draw, when senior defenseman Eagan Callahan fired a blast from the left point with traffic in front of the goal crease. Senior forward Eamon O’Brien extended the lead and all but closed it out with an empty netter late in the contest.

New Trier, coached by Bob Melton, had multiple point blank opportunities to put one past Shearson, but he stopped them all.

The last one was a redirected shot from the right point, followed by a scrum in front. The Trevians took multiple hacks at the loose puck, but Shearson and Loyola’s defenders held their own until the final horn.

“The quad is always a different game. For the new kids on the team, it’s the biggest crowd they’ve ever played in front of and that’s definitely not easy,” said fellow senior forward JT Travis.

“The quad was definitely the worst game that or team has played all season,” he said.

While Travis, as of Dec. 10, is tied for the team lead with Mark Ashmore at 21 goals a piece, Soudan leads NTG with 41 points in 34 games on the season, one year after doing the same.

A pass-first player, Soudan has picked up more assists than goals scored in both campaigns.

As one of multiple returning contributors, Soudan has been pleased with the way his team has started the season, in spite of the loss to Loyola.

“This team has impressed me with work ethic and depth more than anything. I am confident that every player on our team can contribute to the team in a positive way,” he said.

New Trier began the season on Sept. 6 with a 7-0 victory over Notre Dame College Prep and, kept up the streak for months, 30 games a two time span.

Right now, they sit at 34-2-1, in great position to make noise in the second half of the season and into March. They even have another shot at their arch-rivals, the Ramblers, on Jan. 12.

“Loyola is always the game we look forward to,” said Travis.

A large part of the Trevians’ success has been their goaltending play. Senior Owen Reger and sophomore Preston Watt are both in their first years on NTG, replacing class of ‘18 goalies Hayden Wieczorek and Ethan Paul.

“Both of them have been playing outstanding,” said Kochman, who has among the highest point totals on the team at 36. “I anticipate them continuing to split time, and the team feels very confident when both of them are in net,” he said.

The Trevians are in a bounce-back mode for the 2018-19 season, after a disappointing 8-3 playoff defeat at the hands of Glenbrook South last year. Per Coach Melton via Winnetka Talk, it was their quickest elimination in the past 21 seasons.

In the year prior, NTG took home the state title at the United Center. And instead of dwelling on the Loyola loss, New Trier has turned their attention to returning to the home of the Blackhawks and Bulls.

“In the long run, our goal is to get to the United Center, and the quad loss doesn’t affect our path to get there,” said Soudan. “So we’re keeping our heads up and staying motivated to keep improving.”