Osher behind the line, Boehm in the paint push Trevians past Titans 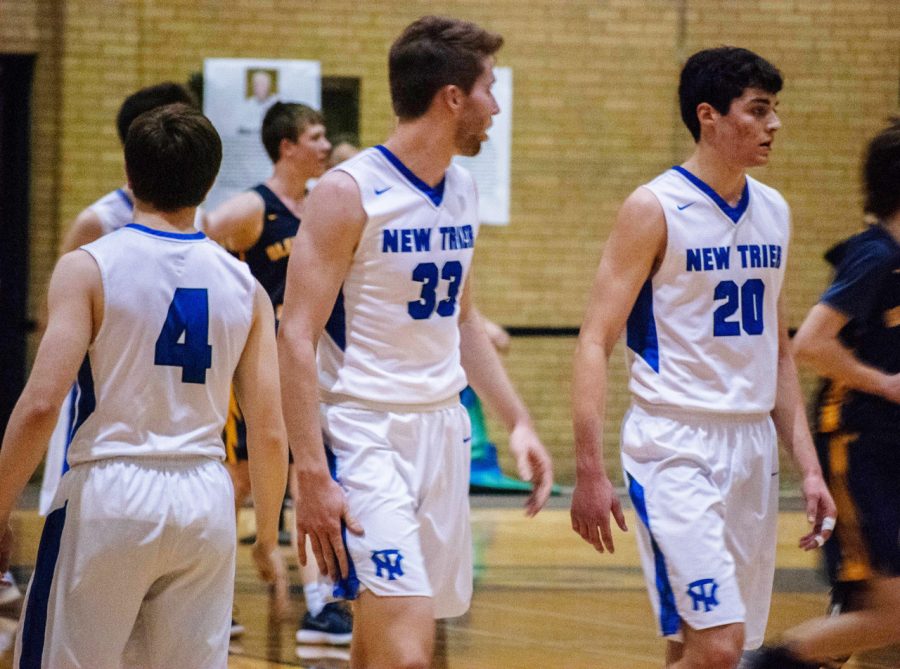 Despite a devastating injury to one of its star players, the Boys Basketball team picked up a win over Glenbrook South on Feb. 1 by a score of 57-45.

6’9” senior Ciaran Brayboy, a Harvard commit, suffered a concussion and had to get 10 stitches after falling head-first onto the court in the third quarter. With their star center out, the rest of the Trevians – specifically seniors Noah Osher, Chuck Sweat, and fellow big man Spencer Boehm – picked up the slack, leading the team to a decisive CSL South victory.

“I think we have a lot of weapons on the court as well as on the bench who are all really good at a few things which makes us deadly as a unit,” said Brayboy, whose CT scan revealed that he had no brain damage.

The team, led by head coach Scott Fricke, has done a fine job turning weapons into wins. As of Jan. 23, the then-18-3 Trevians (they have won each of their three games since then) were ranked 10th in the Chicago area by Michael O’Brien of the Chicago Sun-Times and eighth by Mike Clark of the Tribune.

“Our chemistry is off the charts right now,” said Osher, a three-point marksman who led New Trier with 14 points against GBS. “Offensively, we move the ball really well and take a lot of high-percentage shots. No one is selfish and everyone understands their role on the court.”

Also among the leading scorers was Boehm, a three-year starter at 6’8” who will be joining Washington University’s team next winter, with 13. Sweat had nine off the bench, doing a job that he has done well all season.

“My role coming off the bench is primarily to shoot 3s and hopefully make more than I miss,” said Sweat. “The guards do a great job of finding me on the perimeter and Ciaran and Spencer have a good eye for kicking the ball back out.”

“New Trier should expect games to be this physical from here on out. As long as I’m head coach,” he said. This works well for the Trevians, who feature two giants in their lineup and pride themselves in aggressiveness, especially on the defensive end, as Osher explained.

“Defensively, our size and length causes a lot of trouble for most teams. Sam [Silverstein] and Pete [Burnside] are able to generate a lot of steals and finishing over Spencer and Ciaran at the rim has been difficult for opponents. It’s a lot of fun to be a part of.”

Although he wasn’t among the top scorers against GBS, the 6’5” Silverstein has been a force on both ends this year, using his speed to slash to the basket with ease. He was named to the all-tournament second team at the Pontiac Holiday tournament, at which New Trier finished fifth.

One week from tonight, New Trier will get another shot at one of the three bumps in the 2018-19 road, and the only CSL South team ranked ahead of them by both the Sun Times and the Tribune. The Evanston Wildkits defeated New Trier 54-46 on Jan. 11, forcing 19 turnovers in the process.

“We need to turn it over much less and be more aggressive against their pressure,” said Brayboy. “We also need to transition back to defense more quickly if we do happen to turn it over.”

In addition to a well-timed run for the Wildkits in the third quarter, Sweat also recognized that turnovers were the source of NT’s demise that night.

“Most of them occurred on wing or post entry passes,” he said. “When we make sharp passes, that’s when we will start firing on all cylinders.”

Evanston is a talented team with a diverse cachet of offensive weapons, and like New Trier, they have serious aspirations for a long postseason run. Last season, in fact, they were the ones to eliminate the Trevians. After a close loss last time, NT is confident that they’ll fare better with a second chance.

“If we eliminate turnovers that gave them easy layups, I’m confident that we’ll have the upper hand,” said Osher. “I couldn’t be more excited to get another shot at them and I’m sure our team will be ready.”