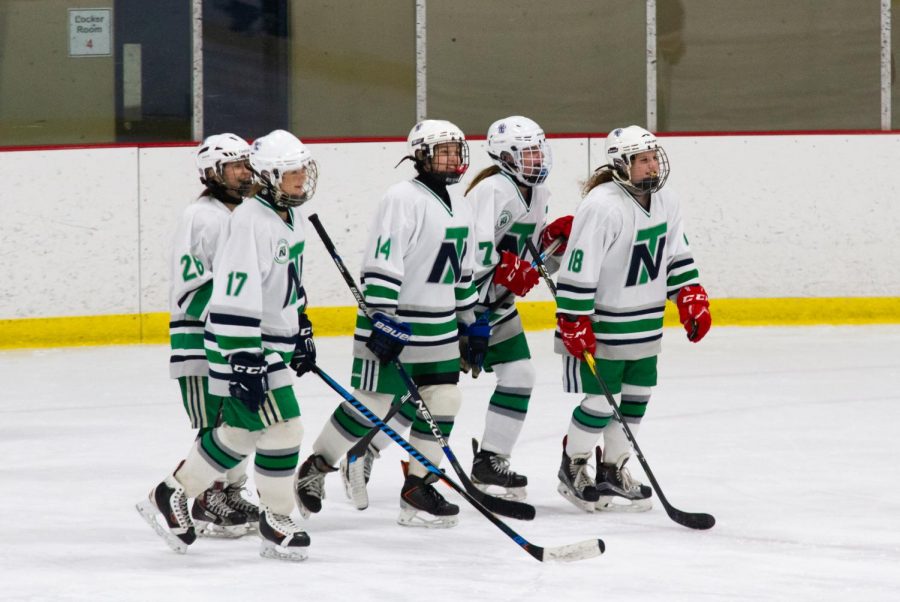 New Trier Girls hockey has reached the state semifinals once again, easily defeating Lake Forest in the quarterfinals on March 3 by a score of 7-2.
As defending state champions, the Trevians have felt a target on their backs throughout the 2018-19 season. It hasn’t mattered, as they entered the playoffs at 20-3-1 with an astounding goal differential of 171-55.
“Being defending champs also comes with everyone wanting to beat you,” said sophomore forward Ella Huber.
“Our games, especially against Fenwick or Loyola, have a higher intensity and a lot more physicality,” added senior defenseman Sarah Herd. “I have definitely noticed other teams shortening their benches against us and playing only their best players.”
Herd singled out Fenwick and Loyola without prompting, and with good reason. Those two teams account for two of New Trier’s three losses and its lone tie. Unsurprisingly, Fenwick and Loyola also account for two of the other three teams in the state semifinals, and the Trevians battled battle the Ramblers yesterday (March 7) with a chance to play at the United Center (the home of the Blackhawks and a terrible basketball team which hosts the state championship) on the line.
Despite their remaining opponents having a history of playing them competitively, the Trevians remain confident about their chances on Thursday.
“Entering the playoffs, I’m very confident in our repeat as state champions,”
“We have a very talented roster this year and I believe that if we play our game and everyone puts forth their best effort, we have a good chance at repeating” echoed senior defenseman Maddie Babnik, who took home the Cammie Granato Illinois Female High School Hockey Player of the Year award.
When she graduates, Babnik will continue her hockey career at Ohio State.
“This is also a very talented team with high expectations. I hope during my time there I can help the team win a National Championship,” she said.
While she had an outstanding season, Babnik was not the only one to win a prestigious award this season. Head coach Lenny Munson was named Amateur Hockey Association Illinois’ Coach of the year for his work with the defending champs.
New Trier boasts a talented senior class, especially on the defensive end. Babnik and fellow senior Addie Buddington were vital on the while the team was shorthanded in last year’s state championship. Per Pioneer Press, they shut down Glenbrook South for the duration of seven penalties, killing them all.
“We definitely do have a reputation to uphold,” said Buddington. “In the hockey world, we’re known as the ‘All-Star team,’ so we really are expected to make it to state and win again. I’m fully confident we’ll achieve that goal.”
Senior goaltender Abby Wieczorek, also a starter on the 2017-18 team, made some crucial saves in that game as well. She is a key part of the current squad, contributing five shutout performances so far.
Babnik and Buddington helped represent New Trier at the All-State game back in February, along with junior forward Kate McLaughlin, junior forward Julia Laden, sophomore forward Sarah Shvartsman, and Huber, NT’s leading scorer. She in particular has starred, especially for first year on the Varsity team.
“Our team is filled with some talented players, a number of whom also play Triple-A club hockey. So if everyone plays their role and works together, I believe we can accomplish what we want to and come on top,” explained Huber.
Sophomore forward Hadley Freedman, while not named to the All-State team, has been successful on her first year on Varsity as well, currently sitting as one of New Trier’s top scorers.
“I have had a ton of fun on and off the ice,” she said about her debut season. “I have put forth my best effort, and it does pay off.”
When the Trevians faced Loyola (they do so after this writing but before the date of publication), they know that the Ramblers will be out for revenge. New Trier beat them in double overtime, thanks to a game-winning goal from McLaughlin, to send themselves to the United Center last season. The semi-final rematch is expected to be exactly as competitive.
New Trier, however, remains unphased, reiterating that their roster remains loaded.
“I’m confident in our ability to repeat as champions,” said Herd. “We’ve lost some good players since last year, but this is the most talented team we’ve ever had.”