Restrictions have changed how swimmers practice and compete 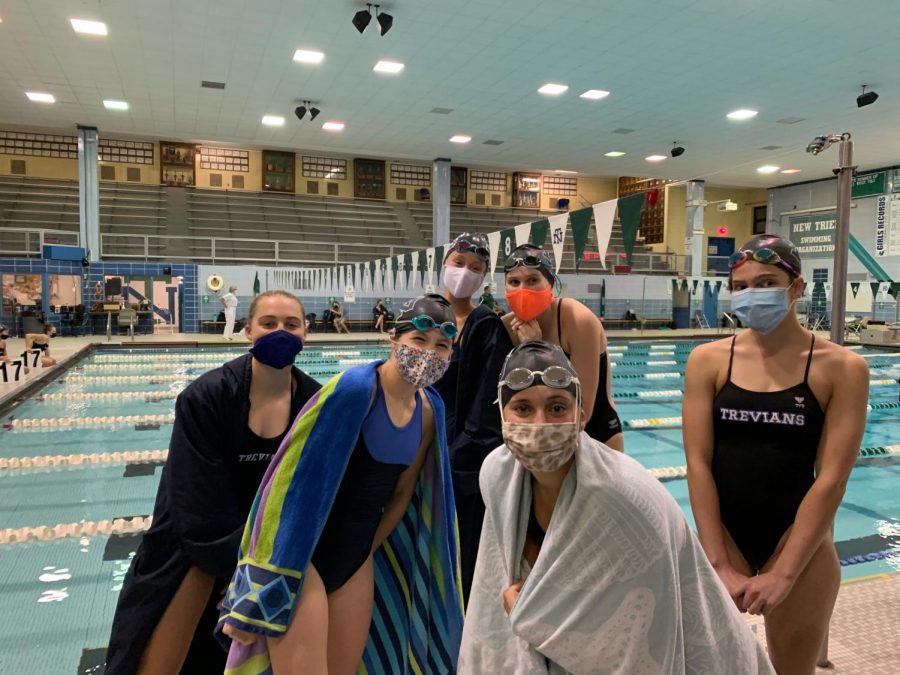 Swimmers pose at meet vs. Evanston on Sept. 25

The restrictions brought on by the pandemic  have been difficult for the swimmers to adapt to, even while they acknowledge the guidelines are keeping them safe.

One of those changes is that swimmers can’t use the school’s facilities as much as they used to.

“We’re not allowed to use the locker rooms (except as restrooms), so we show up and leave in our suits. We have to use our own personal equipment (e.g. fins, kickboards, buoys, paddles) and bring our own towels to practices instead of using the gear and towels the school normally provides,” said junior Jane Sanderson.

Practices themselves look different this year, and there are 2 fewer of them per week than there were in the past.

“We are put into three groups (A, B, and C) and alternate the two groups who swim in the afternoon while the other is at the Northfield campus lifting,” said junior Kaelyn Gridley.

During the practices, two swimmers are in each lane but start on opposite sides, according to senior Olivia Abbot-Havers.

In addition, the meet format has changed significantly. Instead of physically swimming next to swimmers from other schools, the two teams compete separately from their own pools and then compare their times remotely.

“We are not allowed to compete in relays. We have to stay six feet away from each other at all times. We have to wear our masks up until we get on the blocks and we have to put them back on as soon as we finish our race. Also… we aren’t allowed to have spectators so the pool is very quiet,” said Abbott-Havers.

Junior Annie Lewis says that she misses competing in-person because it helps motivate her to go faster.

“What I really miss is not being able to have head-to-head competition with other schools. I feel like that competition helps you push yourself to the limit,” said Lewis.

Some swimmers are thriving with the new rules while others are finding it more difficult to adapt.

“I would say that we have some girls on the team who are at their best times or doing better, however I would say that’s pretty uncommon at this point in the season. Most people in my group are feeling pretty sore and are struggling to get their best times, but that’s normally how the beginning of the season goes every year. A lot of it really depends on the person,” said Gridley.

So far, the team has won all of its dual meets, including a 120-72 win against the Evanston Township High School on September 25. While the team is doing well now, the future is murky since the swimmers still don’t know if they’ll get to compete in a state meet.

Despite all of these hardships, the team still values being able to practice and compete at all and are able to keep morale high.

“We know how lucky we are to be able to compete during this time. This year we are limited to one team on the pool deck at a time… the team has added walkout music before each event to keep the vibe,” said Lewis.

“It’s such a great community to be a part of. The energy is contagious,” said Lewis.