The positive test led to widespread disappointment from players, coaches 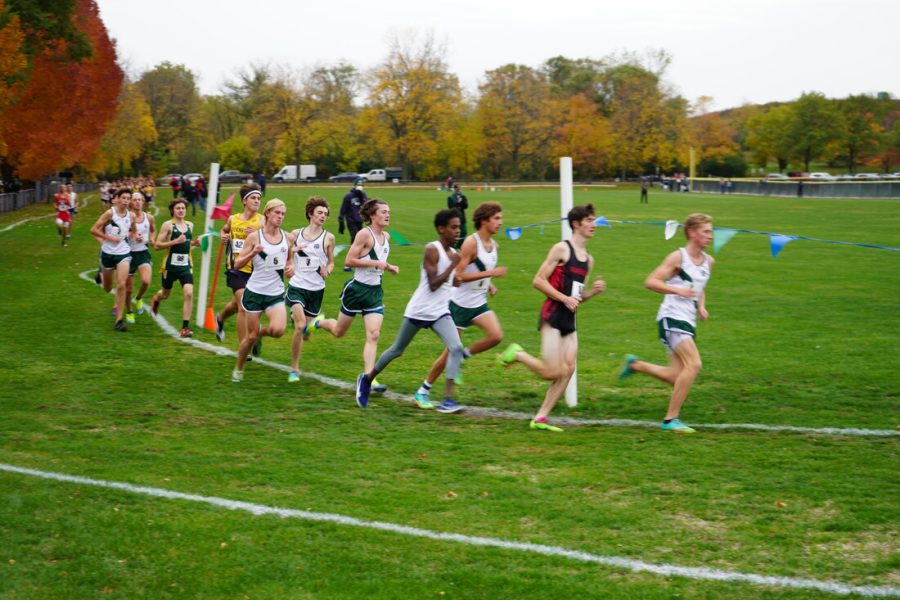 The varsity team runs the three-mile race at Duke Childs Fields on Oct. 17. The JV team was unable to compete because they were quarantining after a positive test result

Just days before their conference meet on Oct. 17, the New Trier boys JV cross country team had to cancel their season because a runner tested positive for coronavirus, causing other runners on the squad to quarantine for two weeks.

Many team members said they were disappointed that they couldn’t participate in one of the biggest meets of the season. Griffin Harris, a junior on the cross country team, said he felt the impact of this result not just on himself, but on the team as a whole.

“It was disappointing because we only had four or five days [before] our final race,” said Harris. “That [was] especially bad for the seniors concerned this was their last year. And they didn’t get to compete at conferences.”

Junior Max Ryerson said that even with the cancelled race, he still had positive takeaways from the season.

“I was a little disappointed,” said Ryerson. “But at the same time, it was really awesome that we were able to have a season in the first place and to have a couple months racing in cross country meets.”

Coaches, too, were saddened.

“I was sorry for [the runner who tested positive] and sorry for the squad,” said Mark Wukas, an assistant coach for JV blue. “We had started tapering for the conference meet, which was less than a week away. All that hard work just lost. Coaches want athletes to go out on their best effort, and we could not do that.”

Even though there was a positive COVID test, runners thought that the team was taking the necessary precautions to  prevent the spread of the virus such as social distancing and wearing masks.

“The coaches had a plan going into [the season] about what they wanted us to do, and I think they executed the plan really well,” said Ryerson. “I only ever ran with about three or four different people and we were all wearing masks while we were warming up.”

Harris said he thought the team was well prepared to avoid the spread of the virus. “[Our team wasn’t] near any other teams, so there should’ve been no transmission [of the virus] to the JV 1, varsity, and freshman teams.”

When any runners did potentially contract the virus, the team followed strict safety protocols issued by the Illinois High School Association (IHSA). Greg Harper, an assistant coach for JV green, thinks the team did a good job following these rules.

“[Although] there was never a [coronavirus] outbreak on the team this season, my squad quarantined in mid-September because one of our athletes may have come into contact with COVID-19,” said Harper. “We followed the safety protocols which helped ensure the safety of the squad and preserve [much] of our season.”

Despite the disappointing end to the season, Wukas still thinks there’s a silver lining not just to the cross country season, but the pandemic in general.

“I would urge them to take heart and remind them that we live in extraordinary times and that it is their misfortune to have lost an important high school experience, one that they had chosen,” Wukas said. “The important thing in life is how we react to adversity. Will they come out for track? Will they come out for cross country next year? Have they developed a lifelong habit? Those are the important questions now.”