IHSA restarted sports on Jan. 25; had been on pause since Nov. 20 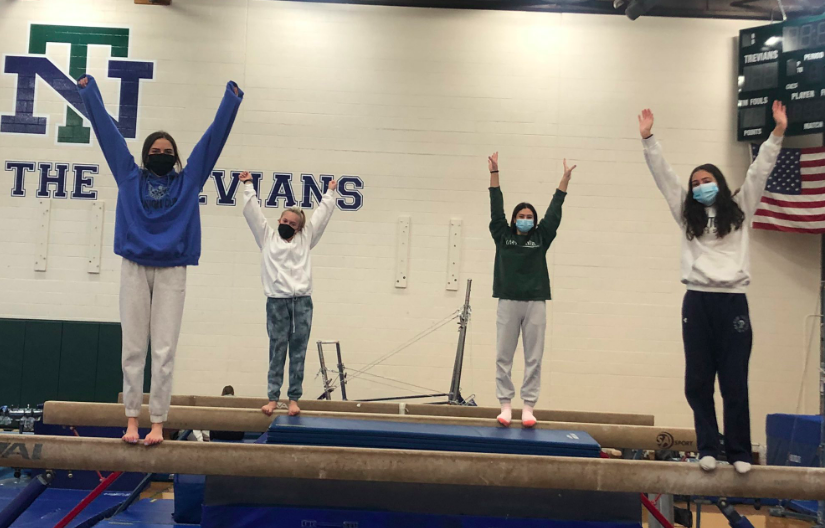 Girls gymnastics team celebrates the resumption of the sports season

Winter sports have resumed in-person practices and competitions, but COVID risk levels dictate how much contact a sport can have during practices and competitions.
Varsity girl’s gymnastics head coach Jen Pistorius says her team has instituted several safety restrictions during practices as a low-risk sport.
“With gymnastics [practices], the coaches are always wearing their masks, but if the girls are doing an event they are allowed to take their masks down (according to IHSA regulations) because we don’t want the mask to [potentially] move over their eyes during an event,” said Pistorius
Junior gymnast Sydney Holder said that social distancing has been simple for the team.
“We’re able to social distance [ourselves] pretty well,” said Holder. “[Since gymnastics] is more of an individual sport, we’re not all coming into close contact like other sports are. When someone does a floor routine, you’re usually one of the only [people] on the floor and if other people are on the floor, they’re far away from you.”
The boys basketball team, a high-risk sport, has to deal with stricter safety regulations. Senior guard Will Geis has felt the difference between pre-pandemic practices and current practices.
“This whole year has been a lot different,” Geis said. “We have to wear masks the entire time and we have significantly less practice time. [It has been] a huge adjustment for me and everyone on the team.”
The IHSA took many health-related factors into its decision in January to allow sports to resume. Augie Fontanetta, New Trier athletic director and member of the IHSA Board of Directors, said that the IHSA has followed the Illinois Department of Public Health (IDPH) when it comes to making significant decisions regarding this season.
“The IHSA [has worked] under the guidance of IDPH and they [were the ones] who allowed sports to resume,” said Fontanetta. “The positivity rate was one of the key elements for the IDPH, and as the positivity rate dropped, the IDPH allowed kids to play sports [based on the region].”
Trying to simulate a normal practice while also implementing safety precautions has been a complex situation for teams. Holder thinks that her team has done a good job at making practices as safe and efficient as possible.

“I think [the coaches] are doing the best they can,” Holder said. “Obviously, it’s a difficult task, but the coaches are really good at making gymnastics as safe as it can be right now with masks, social distancing, and saliva screenings.”

Pistorius has been impressed with her team’s adaptability to the current circumstances.
“Everybody thought [initially] that it might be a difficult thing to be wearing masks, but now it’s second nature for everybody,” said Pistorius. “Everybody on our team has been really cooperative and it’s been a pretty easy transition.”
Similarly, Geis has been proud of how his team has adapted and offers some optimism regarding the success of the team.
“I think our coaches have done a great job dealing with everything going on,” said Geis. “They have run practices very smoothly and blocked out all the outside noise of this crazy year. I love the way this team works hard every single day. We have all bought in to this winning mindset and it is a very special thing.”