The Sept. 3 game was New Trier's second win of the season 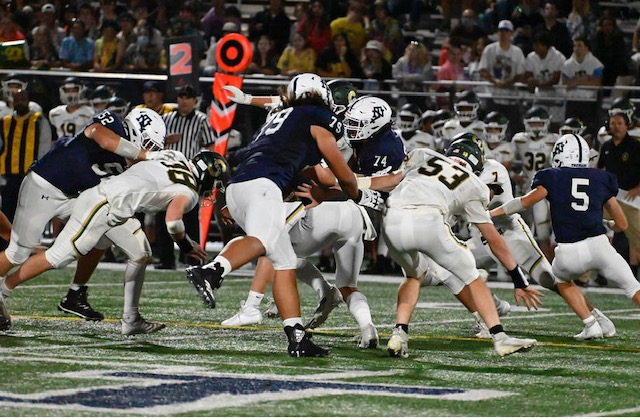 The Sept. 3 game against Stevenson

On September 3, the New Trier football team defeated Stevenson by a score of 32-14. It was the Trevians’ home opener and the stadium was filled with New Trier students, as it was the first game without limited capacity since the 2019 season. The win propelled the Trevians to a 2-0 record after beating Lyons Township the previous week.

Senior running back Jack Cummings was happy with the team’s performance on both sides of the ball.

“I thought we played very well. Our offense was able to drive on their defense and we were able to break a few big plays. Defensively, we forced a turnover, made a good goal line stop, and had multiple three and outs. While there are a few things we can clean up, we had a great game and beat a quality team.”

Senior quarterback Nevan Cremascoli also liked the way the team played against Stevenson and thought that getting off to a good start aided the Trevians in their victory.

“We started off pretty slow in our first game, so it was an emphasis to start faster in [our second game] and I believe we definitely accomplished that goal,” said Cremascoli.

Senior offensive tackle Jesse Mendoza thought that the team’s preparation also had a significant impact on their performance.

“I think the team is really starting to come together,” said Mendoza. “”We really got the playbook down and are starting to play football fast and intelligently.”

Among the highlights wasan interception by senior defensive back Jack Brewer early in the third quarter.

“A play that stood out to me was Brewer’s interception,” Cremascoli said. “We hadn’t had a turnover yet in the season and getting our first one is really going to jumpstart our defense.”

Mendoza thought that a surprising two-point conversion in the second quarter also impacted the momentum in the game.

“[The play call] caught them off guard and it really got the stands going,” said Mendoza.

“Those plays really got the sideline and crowd excited and gave us the momentum to finish the game strong,” said Cummings.

Mendoza thinks that the win opened people’s eyes to what kind of team New Trier is this year.

“I think [the win] validated to everyone else what we already know, and that is that we are a great team,” Mendoza said. “If we fight hard and finish through four quarters, we’re going to come out on top.”

Cummings believes that the team’s strong start has helped them enjoy the game more.

“ We’re just going to keep on rolling and having fun while doing it.”